Gunfleet Sailing Club held the first race in its Winter Series in weather more reminiscent of a summer’s day and, under blue skies and warm sunshine, it was Ken Potts who took his Laser into first place.

The forecasted force six winds did not materialise and competitors found conditions far less strenuous, with a pleasant force four breeze to see them on their way.  As the clock ticked away and the start got ever nearer, so the dinghies nudged themselves up to the line, and when the class flag fell from the yardarm it was Andy Dunnett in his Laser, at the windward end, that lead the way.  Sailing close-hauled down the coast to the first buoy, and fighting an ebbing tide, it was Potts who rounded the Eastcliff mark first; the others all close on his heels.  A reach followed, to the AWS buoy, and then a run up the coast to the Kingscliff buoy; but it was the beat back to AWS and then out to Seaward that gave the helms a chance to try different tactics.  Most boats sailed tight round the AWS mark on the first lap but Harry Swinbourne chose to continue along the coast in the hope of cheating the tide.  It was on this up-wind leg that John Tappenden, in his Laser, had the chance to move ahead of Dunnett although, at this point, the gap remained quite small.

Potts continued to lap-up the conditions, revelling in the reach back to the Kingscliff buoy before sheeting in hard and heading for the line.  Yvonne Gough in her Laser was close to Swinbourne but trying to move up the pecking order proved impossible; whilst continuing to dominate the top three places were Potts, Tappenden and Dunnett.

By the second lap the wind had fallen a little which seemed to actually give Rob Lockett’s Laser a lift and he was clearly narrowing the gap with Dunnett, but to no avail as clearly Dunnett was having none of it.  Also chipping away, but this time at the lead boat, was Tappenden who was accelerating well, but unfortunately not fast enough to be a real threat to Potts who took the winning gun.

A course to catch all winds 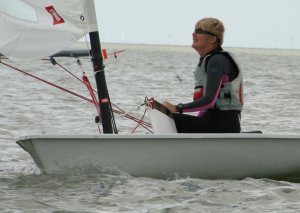 The only lady helm in the first race of the Gunfleet's Winter Series, Yvonne Gough, concentrating hard as she sails her Laser