Gunfleet Sailing Club held its race for the Fleet Championship over the bank holiday weekend - 26 & 27 August 2017, with Jack and Elliot Berry claiming victory in their Fireball.

A very light east/north-east breeze, just slipping into a force two, saw the competitors holding close to the line in anticipation, the freshly flooding tide negating the risk of being overeager.  At the start it was the Berry boys that were instantly away on a tack up the coast to the Kingscliff buoy, followed very closely by Robert Gutteridge in his Laser and Jack Berry in his Comet; the latter sailing slightly freer off the wind and gaining good speed.  It wasn’t very long before Clare Williams and Michael Giles took their Xenon through all the single-handers but stopping short of the Fireball.  On the tight reach out to the Seaward mark both the Fireball and the Xenon hoisted their spinnakers and so gained extra speed, opening up a considerable gap against the slow handicap dinghies.  After a gentle gybe out at sea it was another reach down to the AWS buoy, before a beat back out to sea.  It was this latter leg that caused one or two competitors to pinch in order to try and make the buoy in one, but without success; only managing to stall their boats.  The penultimate leg was a run down to Eastcliff, and then a beat back through the line

For a while Eddie White held off Harry Swinbourne in the Laser fleet but surprisingly White capsized when tacking close inshore, losing several minutes righting his craft.

In the slow handicap fleet it was the Comets of Harvey and Cath Bicknell that dominated, but the Topazes were busy having their own battles.  Mia and Hannah Gittins did very well, considering that they have only just started to sail, giving Millie Berry and Poppy a good run for their money.  Meanwhile Owen and Lauren Hooper sailed a steady course in their Topaz and were delighted to be first home in their class.

By now the wind had freshened slightly, but during the second lap it had fallen right down again, only to freshen during the third and final lap.  For the Berry brothers the variable winds appeared to make little difference and they took the winning gun, and the trophy, with a reasonable margin.

On the Monday the weather was set fair for the Bank Holiday Cruise.  A fleet of dinghies, escorted by one of the Club’s Rescue Boats, headed up the coast to Frinton. The sun shone, the onshore breeze was just a force two, touching three, and the sea was very clear.  On arrival the small armada landed and relaxed on Frinton’s golden beach, whilst tucking-in to a marvellous picnic.  Time seemed to fly very quickly and all too soon it was time to head back to the Club, a very relaxed broad reach all the way.  With the tide under the boats it was not long before the boats were back home and being packed away in the compound, everyone united in the view that it had been the best cruse of the year.  Special mention should go to Harrison and young George in their Topaz, George having a huge smile on his face from beginning to end.  Also Mia and Hannah Gittins deserve a special mention as they sailed a Topaz there and back, being only the second time out on their own since taking up the sport a few weeks ago.

The Club is now busy making preparations for the Solution dinghy National Championships, being held from Friday 1 September until Sunday 3 September.  This will be the third time the Club has played host to this prestigious event. 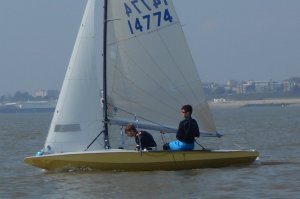 Jack and Elliot gaining a convincing win in their Fireball

A small and straightforward course due to the very light airs 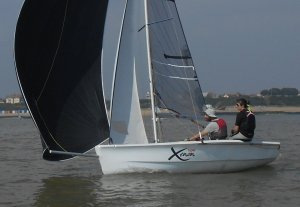 Clare and Michael flew their spinnaker whenever they could 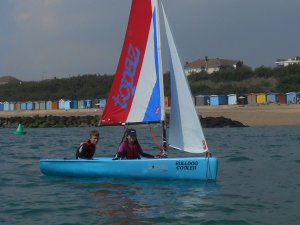 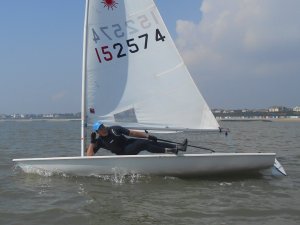 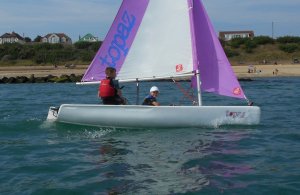 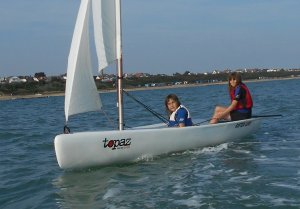 Mia and Hannah, on only their second time by themselves, on the way back from Frinton