Beth Beats Them All

It was the turn of the female helms on Sunday 16 July when the Gunfleet Sailing Club held its race for the Austin Ladies Trophy.

In hot and humid conditions, with a force 2 westerly breeze, the competitors beat down the coast to the Eastcliff buoy, both Beth Elliott in her Laser, and Cath Bicknell in her Comet, heading straight out to sea to get the full benefit of the flood tide.  Once round the mark it was a run back up to the AWS buoy, both boats level pegging all the way.  Just a little further back was Daisy Swinbourne in her Topaz, working hard to keep the gap to a minimum.  The third leg took the fleet offshore to the Seaward mark before a reach to the Kingscliff buoy and then a beat back through the line.  Youngest competitor of the race Esme Symmonds, after a fine start in her Topper, struggled a little as she headed out to sea and eventually retired.  On the reach to the Kingscliff buoy Elliott seemed to find an extra gear and began to pull away; once round the mark she sailed close hauled directly to the line, having noticed that the wind had backed to the south-west.  Bicknell, on the other hand, put in a tack and headed out to sea before setting course for the line.  On the second lap, try as she might, Bicknell failed to make up for lost time and could only watch as Elliott crossed the finishing line to take the trophy.

The previous Wednesday evening Gunfleet held the second race in its series for the Tony Chadd Trophy.  Peter Downer lead from the start, on the beat to the Kingscliff buoy, but surprisingly headed inshore, whilst Harry Swinbourne grabbed the opportunity to take his Laser out into the ebbing tide which would definitely give him the advantage.  However, disaster struck when his toe strap broke and Swinbourne flipped head over heels into the water, his boat immediately capsizing.  Having righted the craft there was nothing more he could do other than sail back to the shore.  The rest of the race proved uneventful, until the very last leg of the second and final lap when Tom Philpot and Jack Harvey capsized in their 405, but they had the boat upright quick enough to still take third place. 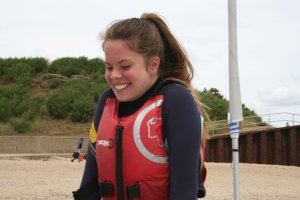 The Ladies Trophy course with two laps for everyone 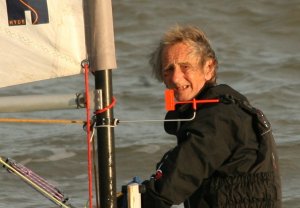