Downer Does It Despite Course Deviation!

The sailors of Gunfleet Sailing Club were joined by several members from Clacton Sailing Club on Sunday 13 August to take part in The Gunfleet Chase – an exciting pursuit race along the seafront, which was won by Peter Downer in his Comet.

The 90 minute race saw a staggered start of 19 craft, based on the different speeds of each class.  Taking the full 90 minutes was Ted Newson in his Topper, but he was soon overtaken by Steve and Poppy Swinbourne in their Topaz, which started 6 minutes and 35 seconds later.  In the light north-westerly winds, the first leg was a reach, which turned into a fetch, down the coast to the Clacton Pier buoy.  Several minutes later the three Comets were underway, with Downer getting the best start of the whole race, but it wasn’t very long before Cath Bicknell had slipped past, all three Comets soon taking the top three positions.  However, the wind backed slightly and required the boats to put in a last minute tack as they reached the first mark, giving Downer the advantage.  By now the five Lasers were well underway and chasing the slower boats, Andy Dunnett leading the pack.   Almost 18 minutes after the Topper had started, the Xenon of Claire Williams and Michael Giles was unleashed; followed a little later by Robert Banks in his Contender.  Unfortunately Banks had misjudged the start time and had to return to start again; frustratingly getting a second false start and so removing any chance of winning.  Then it was the turn of the visiting catamarans with the three Dart 16s making an impressive sight as they rapidly gave chase to the dinghies which, by now, were in the distance.  The large Hurricanes got away some 7 minutes later, and the final craft was the single handed A class, helmed by Pete Boxer, chasing everyone else almost 45 minutes after the Topper had set sail, in what appeared an almost impossible task!

On the reach from the Pier buoy out the Seaward mark, Brian Allen and Charlie Venables, with the spinnaker flying on their Hurricane SX, suddenly capsized.  Not to miss out on the fun, Matt Burrell and Dan Brzezinski then capsized their Hurricane SX.  Meanwhile itt appeared that nothing could stop Robert “Sparks” Mitchell and George Venables in their Dart 16, try as their fellow 16 sailors might; Mark Venables and Gonzague France having an exciting tussle with Rob “Chopper” Mitchell and his wife Cath in the process.

One by one Boxer picked off his competitors, but found Downer well out of reach through very astute sailing, and a little bit of luck.  But suddenly it all went wrong for Downer as, having completed a lap, he turned early at the wrong mark and started heading back towards his rivals.  Fortunately for him the end of race horn blasted across the water, just in time to still give him victory.

Two of Gunfleet's regular sailors were missing for the race as they were representing the Club at Walton and Frinton Yacht Club's 2017 Dinghy Week.  John Tappenden took overall first place in Division One racing for the week, and Ken Potts came first overall in Division One at the weekend; Gunfleet Commodore Richard Walker congratulated both of them for their first class sailing and bringing these honours back to their home Club. 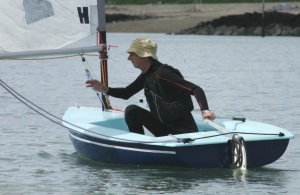 The Winner - Peter Downer in his Comet 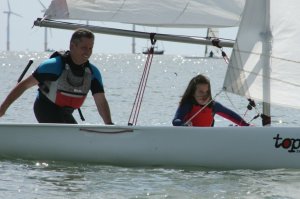 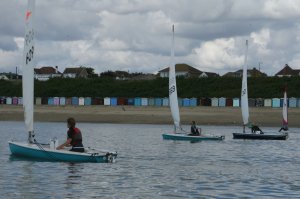 The Comets get underway in light airs 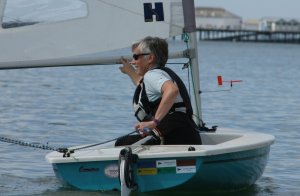 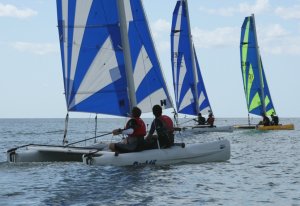 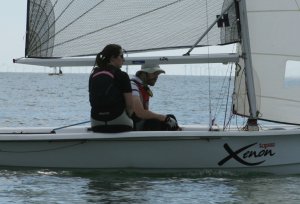 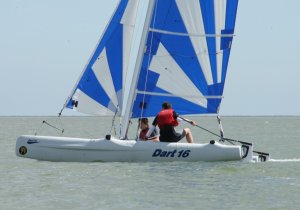 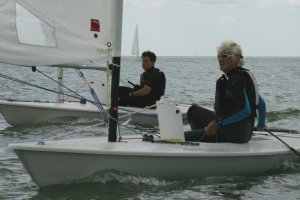 Andy Dunnett and Harry Swinbourne battle it out in the Lasers 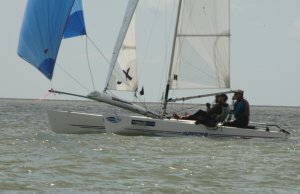 The Hurricane SX, sailed by Matt Burrell and Dan Brzezinski makes an impressive sight with its kite flying 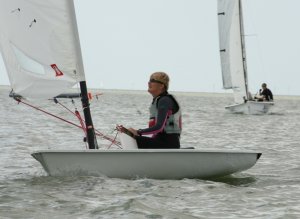 Concentrating on getting maximum lift, Yvonne Gough in her Laser 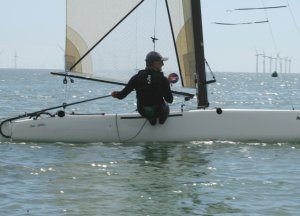 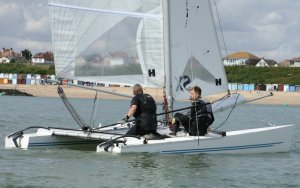