The Golden Tones At Gunfleet 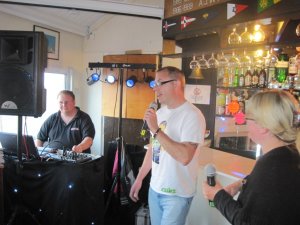 Nicki pauses whilst Kevin serenades his wife
Gunfleet’s Eurovision Karaoke, last Saturday 10 May, really hit the high notes with a packed Clubhouse and an array of musical talent.  Ted Newson, along with Korben and Mac Symmonds, kicked the whole thing off with some great harmonies on some of the very latest hits, and then it was the turn of husband and wife Kevin and Nicki Jay – rolling back the years with some tremendous rock classics.  Before long we had the Gunfleet’s answer to One Direction as a group of dads relived their youth, and then the mums turned into the Gunfleetettes to woo us all with a real “wall of sound”.
Read more 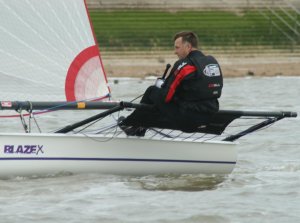 John Tappenden sails into the lead in the London Trophy
Last Sunday 4 May Gunfleet Sailing Club held the race for the London Trophy; an event exclusively for the faster handicapped boats.  This also counted towards class points for the Solutions, Lasers and Hobie 405’s.  Conditions appeared ideal with a pleasant force three, touching four, south/south westerly wind, blue skies and sunshine.  The competitors all hovered by the line, edging nearer and nearer as the seconds ticked away, followed by a sudden surge at the start.
Read more

Gunfleet Sailing Club held its race for the Wallet Trophy last Sunday afternoon 27 April in a force four, touching five, easterly wind.  With the sun breaking through the competitors jostled eagerly at the line and, in some cases, just a bit too eagerly.  As the class flag fell from the yardarm the Hobie 405 of Charlie and Harry Spence, and Andy Dunnett’s Laser were both the wrong side; the individual recall flag being instantly hoisted to point out the error.
Read more

Spring Series Excitement All The Way 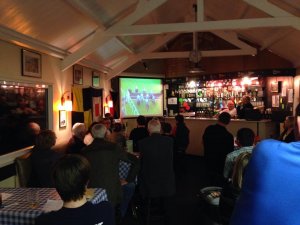 And they're off - with not a boat in sight!
Last Saturday evening 19 April Gunfleet Sailing Club held its very first Horse Race Night and it proved a real smash.  The canter of hooves, the smell of the turf, all on film of course, and the roar of the crowd – i.e. the members in the Clubhouse, the evening was an absolute hit.  Betting was fast and furious; the horses sweated, the men perspired and the ladies glowed gently as the Clubhouse reached fever-pitch!  At half times it was a choice of burgers, hot dogs, carrots and straw and with punters, jockeys and horses all fed it was down the straight and into the second half.
Read more 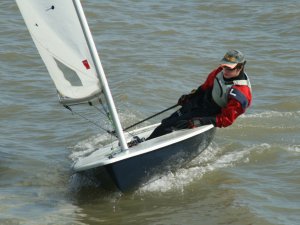 Cadet Commodore Robert Gutteridge going for it in his Laser, just prior to gear failure
Fifteen dinghies took part in Gunfleet Sailing Club’s second race in its Spring Series last Sunday 13 April.  To those on shore the blue skies and unbroken sunshine made it look idyllic out on the water but with a wind that gusted from force 2 to 4, and also veered from west/north-west to south-west, it proved quite unpleasant conditions for the actual sailors.  As the clock ticked nearer and nearer to the start it became evident that the fluky winds and strong ebb tide were going to catch-out several of the competitors, many struggling to get to the line on time.
Read more 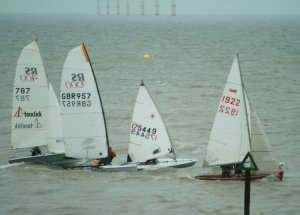 Simon Clarke and Emily Cossens get a good start in their Scorpion with Andy Dunnett in his Laser completely hidden behind them
Gunfleet Sailing Club held the first race in its Spring Series last Sunday 6 April in very overcast conditions with a force 4 – 5 south/south-westerly wind blowing.
Read more

Great Start To The 2014 Sailing Season 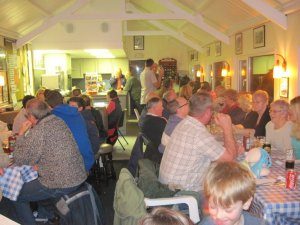 Members enjoying the 2014 Fitting-Out Supper
Gunfleet Sailing Club celebrated the start of the 2014 season with its Fitting-Out Super last Saturday evening, 29 March; so popular was the event that the “house-full” sign went up weeks ago and several members were unable to get tickets.  Club Commodore Richard Walker welcomed all those present and was pleased to be able to say goodbye to the wet and windy winter, thanking the members for such splendid support during the recent annual Work Weekend which resulted in the place being made smart and tidy for the coming year.
Read more 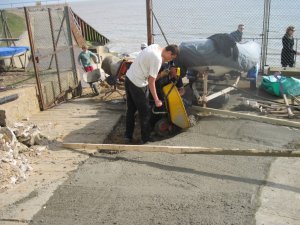 Busy replacing part of the compound base
Last Saturday 15 and Sunday 16 March the Gunfleet had a great response from members for the Club’s annual Work Weekend.  In glorious sunshine some 17 projects were tackled and by the end of the first day the Clubhouse had been creosoted, the changing room walls repainted on the outside, and the ceilings inside had also been re-plastered.  Also, over three tonnes of concrete had been laid in the compound after a failing section of hardstanding had been broken out, and the damaged felt on the Pagoda had been replaced.
Read more

Perfect weather greeted members of Gunfleet Sailing Club when they turned-up last Saturday 22 February for the annual cliff clearance.  Armed with loppers, hedge-trimmers, secateurs, and saws the group cut-back the tamarisk around the Club.  Assisted by Tendring District Council, which provided a shredder and an operator, the branches were speedily turned into mulch.  Rear-Commodore Jon Meggison, and Cadet Rear-Commodore Daisy Swinbourne ensured the helpers were supplied with hot drinks throughout the day and, at lunchtime, provided beans on toast for everyone.

Love Was In The Air Down The Gunfleet 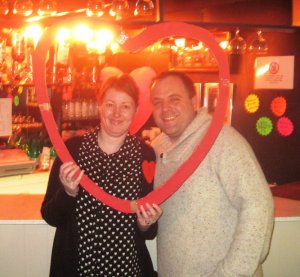 Tony and Lyn celebrating their win in the Mr & Mrs competition

Gunfleet had a visit from cupid last Saturday 15 February when the Club held its Valentine’s Party.  Everyone turned their hand to making romantic messages and pictures from scratch-art hearts before turning their attentions to a quiz all about love.  There then followed some superb food as Pizza, Garlic Bread and Magnum’s (ice cream – not champagne) were served to a hungry crowd.  There then followed the main attraction of the evening as couples took part in the Mr. & Mrs. Competition.  With our very own Kevin “Mr. 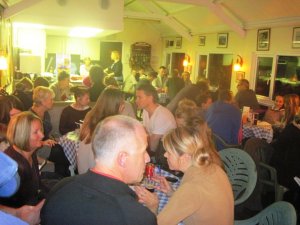 Members eagerly await the start of the Gunfleet Quiz
Saturday evening, 18 January, saw “House Full” signs up at the Gunfleet Sailing Club when the ever-popular Quiz Night took place.  Quizmaster Ian Power set the questions and teams furiously ferreted in the “little grey cells” to come up with the answers.  A broad spectrum of ages helped immensely as a knowledge of modern music was as important as that of biblical references.  All too soon it was the halfway stage and whilst scores were worked out the teams enjoyed savoury snacks from the Galley Crew.
Read more 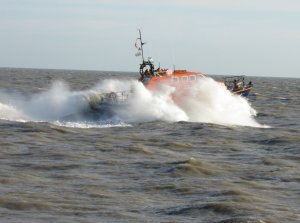