Gunfleet Sailing Club held the first of its 3 in 1 races, for the Wallet Trophy, on Sunday 8 May, when three short back to back races were held and the final positions then determined by the individual results of each race.

The wind was a fresh force four, gusting five, north-easterly which certainly kept the competitors on their toes.  At the start Jono Dunnett lead the fleet in his Laser, with Ken Potts, Andy Dunnett, Robert Mitchell, and Brian Allen, also sailing Lasers, hot on his heels.  The freshly flooding tide meant the first leg, a beat up to the windward mark at Kingscliff, kept the helms close to the shore in order to mitigate the tide’s negative effect.  In fact the tacking tactics meant everyone had to keep a sharp look out for dinghies cutting across dinghies, port tack boats always being required to give way to those on starboard.  First to capsize were Simon and Nikky Kedge in the Topaz, and then their daughter Laura also capsized her Topper, but the Club’s Rescue Boat was immediately on hand to ensure all was well.

Jono maintained his lead as the craft had an exhilarating reach out to Preston Park buoy, with Potts and then Mitchell following suit.  The third leg was a run, with the tide under them, to the Lilley Farm mark, and all the time Potts was putting the pressure on Jono.  Whilst reaching back in to the Eastcliff buoy and then hardening up for the beat back to the line, Potts saw an opportunity to slip in front, but it was only whilst tacking towards the Club that the overlap became clear.  Meanwhile Andy, who had decided to sail with a radial rig, had steadfastly hung onto the full rig sailors and was actually leading on handicap.  The second lap saw little change in positions resulting in Andy Dunnett taking the first race, with Potts second and Jono Dunnett third.

The second race saw Potts take an early lead, followed by Jono and then Andy Dunnett, with capsizes becoming more frequent.  Carlo Bardetti managed quite a spectacular capsize, followed by Dave Ingle in his RS Aero; the latter deciding to retire back to the shore.  With just one lap this time, Potts came home to victory, followed by Andy Dunnett and then Jono.

On the third and final race Allen had a tight start and was first away from the line but once again Potts managed to pull in front.  Bardetti decided he had taken enough punishment and retired, whilst Mitchell capsized on the run from Preston Park to Lilley Farm; the top three results being the same as the second race. 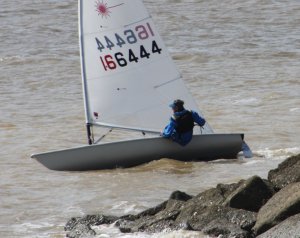 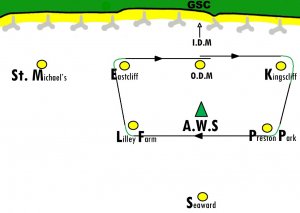 The course for all three races 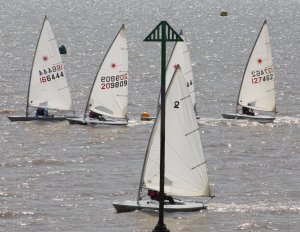 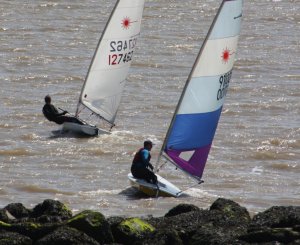 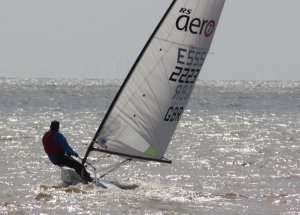 Dave Ingle heads out to sea in his RS Aero 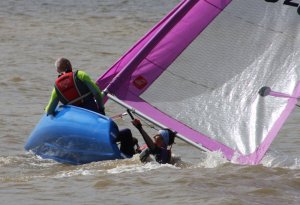 Whooops - Simon and Niky Kedge get caught-out in the Topaz