The competitors rigged their boats in almost breathless conditions, in the anticipation that the heat from the land would bring a pleasant onshore sea breeze but as they drifted to the start line their optimism began to fade.  What little breeze there was did, indeed, come from the south but was very light although sufficient to allow the dinghies to make slow progress against a freshly ebbing tide.  Ken Potts lead the way in his Laser, followed by Peter Downer in his Comet and then Paul Stanton, also in a Laser.  The initial leg was a fetch to the Eastcliff mark and it was Downer that made it there first, but being a little wide it allowed Tappenden to tack tight and slip ahead, Stanton being alongside.  The boats then tacked out to the Lilley Farm buoy before reaching to the AWS mark; all this time Downer kept his Comet ahead of many of the faster handicapped dinghies and wouldn’t let go of those ahead of him.  After AWS it was out to Preston Park buoy, a broad reach in to the Kingscliff mark and then back to the line.  At the end of the first lap it was a very strong lead for Downer’s Comet, followed by Stanton, Tappenden and Potts, whilst slightly further back Malcolm Smith, racing his Comet for the first time at Gunfleet, was in fifth place.  After Smith came Andy Dunnett in his Laser, Clare Giles in her Europe and then the Lasers of Carlo Bardetti and Brian Allen.  During the second lap Tappenden slowly edged his way to the front whilst Stanton worked hard to try and stop Potts overtaking him but eventually, on the very last leg, Potts slipped by and gained third place.

Wednesday evening saw the Gunfleet holding the fifth race in its series for the Tony Chadd Cup.  Nine dinghies took part, and literally kissing the line at the start was Dunnett in his Laser, as he headed out to sea on port tack to gain the benefit of the freshly ebbing tide whilst heading up the coast to the Kingscliff buoy.  Following close behind, on the same tack but nearer the shore, were Tappenden in his RS Aero and Robert Mitchell in his Laser, whilst Derroll Pedder also chose to take a port tack in his Solo.  The rest of the fleet started on starboard, lead by Potts in his Laser but they were insufficiently close to force those on port to tack or take avoiding action under the right of way rule.  Dunnett maintained his lead as he almost reached the first mark but, having arrived on starboard a little short of his destination was forced to put a port tack in, only to find his close rivals now claiming right of way as they cut much tighter to the buoy on Starboard.  As the boats reached out to the Seaward buoy, on the second leg, Tappenden managed to take the front position by squeezing past Potts but lost it as he gybed around the offshore mark and capsized.  Dunnett and Mitchell, fighting it out for third place had a similar experience when Mitchell capsized at the gybe mark, his mainsheet becoming unravelled and losing him several minutes as he tried to sort it out.  Not to be outdone, Pedder, who had his own battle going with Giles in her Europe, capsized as he reached down to the AWS buoy.  The third leg was a run to Lilley Farm buoy, another reach to Eastcliff and then a beat back through the line.   Tappenden, having made up the time he lost earlier whilst righting his boat, once again got in front and started to carve out a healthy lead; Dunnett overtook Potts and held him at bay.  A little further back the Laser Radials of Yvonne Gough and Brian Allen were having their own tussle with Allen managing to pull away.  The second and third lap saw no change to the top three positions, but did see Rob Lockett capsize his Blaze, having really started to build-up speed. 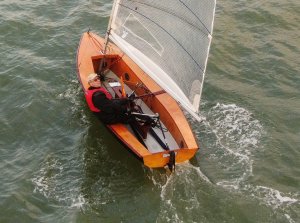 Derroll Pedder in his Solo 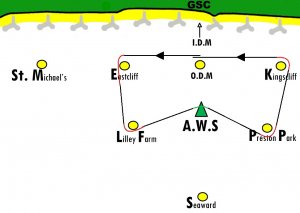 The course for the Jubilee Cup 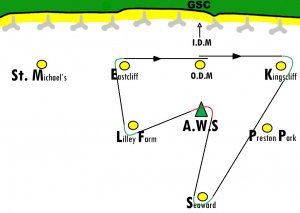 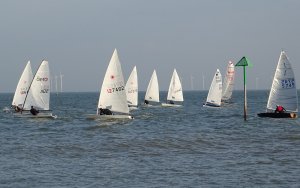 The start of the Tony Chadd 5 Race 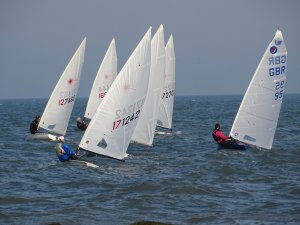 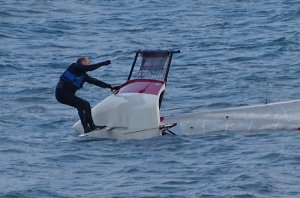