On Sunday 15 September, members came out in force to take part in the first race of the Autumn Series, the summer-like weather encouraging sailors to get afloat.  Unbroken sunshine, blue skies, and blue seas, provided a fine setting as the dinghies left the beach, heading towards the start line.  As the seconds ticked by, Andy Dunnett had his Laser practically kissing the line and it took all his concentration to ensure he wasn’t declared the wrong side.  But when the class flag fell from the yardarm, signalling the start, it was John Tappenden that had cunningly powered-up his Laser just a fraction back and so hit the line at full pelt, immediately taking the lead.  The first leg was a beat down the coast to the windward buoy but with the wind being west/south-west it proved fluky, both in speed and direction.  This didn’t stop Tappenden reaching the mark first, followed closely by Rob Lockett in his Blaze, and then Dunnett.  The second leg was a broad reach out to the Seaward buoy and slightly further back there were some interesting tactics between Yvonne Gough in her Laser Radial, Dave Fowell in his Solo, and Clare Giles in her Europe.  With only a couple of yardstick points between all three class of dinghy, they stuck to each other like glue.  Gough took an early lead but Giles overtook her and then Fowell did likewise.  Everyone cleanly gybed around the offshore mark and then headed in to the AWS buoy.  By the time the craft had rounded this and were, once again, beating to the Eastcliff buoy it was Tappenden, followed by Dunnett, then Lockett, Giles, Fowell and, from further back, Eddie White had now managed to slip past Gough in his Laser Radial.  The competitors ran up the coast to the Kingscliff mark before beating back through the line.  By this time Gough had reclaimed her position in front of White, as well as leaving Jake Gazzard well behind her, he too sailing a Laser.

The second lap saw Tappenden pull further away, but also saw the wind suddenly backing southerly for a while, before veering west/south-west again, changing its strength at the same time.  This unsettling occurrence favoured or disadvantaged competitors, depending whereabouts on the course they were, but made no difference to Tappenden who took the winning gun. 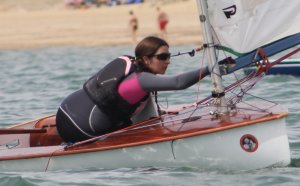 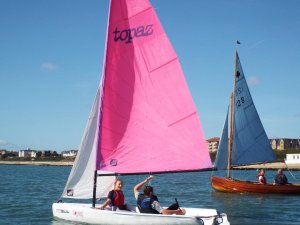 The Saturday cruise was a delight