Gunfleet Sailing Club members played catch-up last Sunday 7 October on a backlog of races previously postponed due to bad weather.  The race, this time, was for the Bill Geddes Trophy and, for the second week running, the winner was Ken Potts in his Laser.

A force three to four west/north westerly wind provided a flat sea, but produced some quite powerful breakers along the shoreline; making launching quite interesting.  High tide coincided with the exact start of the race and as the competitors positioned themselves close to the line they had to be mindful to ensure that the fresh ebb did not sweep them to the wrong side.  As it happened there was a tight bunch close to the Inner Distance Mark, with Potts leading the way, followed very closely by Andy Dunnett, in his Laser, and then the RS Aero of John Tappenden.  As always, with an offshore wind, gusts and lulls appeared as the boats headed up the coast to the Kingscliff buoy on a fetch, the wind sometimes deciding to veer westerly as it was deflected by the buildings on land.  Once round the first mark it was a run out to the Seaward buoy which gave Michael Gutteridge and Derroll Pedder the chance to fly the spinnaker in their GP14, but again those wind shifts kept the pair on their toes.  Sheeting hard in at Seaward the fleet beat in to the shore and hooked around the AWS buoy before continuing to tack back to the Kingscliff mark.  There then followed a second run out to sea before a long reach down to the St. Michael’s buoy and a close hauled slog back through the line.  It was on this last leg that Dunnett capsized when caught off his guard by a sudden gust, but he threw himself back on his Laser and hastily played catch-up.  Less fortunate was Rob Lockett in his Blaze who, whilst busy playing the wind-shifts, managed to complete the first lap by passing seaward side of the Outer Distance Mark, and so disqualify himself.  The second lap proved less eventful, partly due to the slight drop in wind strength, and for Potts, who had held the rest of his competitors off on the first lap, it was the chance to cement a solid win. 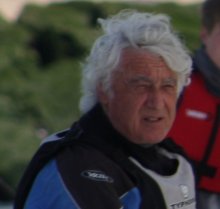 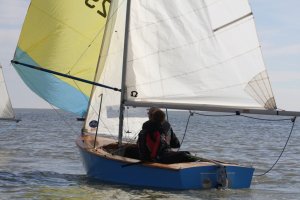 Flying their spinnaker on the run out to the Seaward buoy, Michael Gutteridge and Derroll Pedder in the GP14 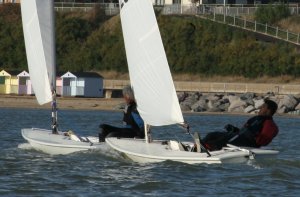 One of the many tussles during the race, Andy Dunnett and Ken Potts in one of the "Laser Challenges"