Ken Revels In The Windy Conditions

Gunfleet Sailing Club held the third race in its Winter Series in very lively conditions, providing the opportunity for Ken Potts to claim another win in his Laser.

There was a slight question-mark over whether any sailing would go ahead, with a force five, gusting six, southerly wind hitting the Club but the Officer of the Day, on discussion with the safety boat team, judged it suitable and an appropriate course was set.  The competitors, all experienced sailors, chose appropriate rigs and it wasn’t long before the craft were flying up and down, the helms eager to get underway.  In fact in one case it was slightly over-eager, as Yvonne Gough jumped the gun in her Laser and was immediately greeted with the individual recall flag; losing valuable time returning to correctly restart.  Potts was instantly leading the fleet, but this only lasted a few seconds as Robert Mitchell and Brian Allen powered up their Dart 16 catamaran and flew past him.  The first leg was a fetch down the coast, with the tide under them, to the Eastcliff buoy, and it was no surprise that Mitchell and Allen were rounding it after just a couple of minutes, carving out a clear path to the Lilley Farm mark.  Meanwhile Potts had pulled away from his nearest Laser rival, Andy Cornforth, who was giving it all he had to try and close the gap.  The second leg saw Cornforth pull away from Andy Dunnett, also sailing a Laser, and once round the buoy it was a reach up the coast, and against the tide, to the AWS buoy.  At this point there followed a beat out to sea, and round the Seaward mark, and whilst the Dart 16 bore away slightly to maximise speed, Potts pointed as high as he could and made the buoy in one tack; his Laser rivals all having to put-in, at least, a second tack.  The penultimate leg was a run to the Kingscliff buoy, although Mitchell and Allen decided to downwind tack, so piling on the pressure.  As the competitors fetched through the line, at the end of the first lap, it was Potts leading on handicap, followed by Cornforth and then Dunnett but on the second lap Mitchell and Allen just got ahead of Dunnett, whilst on the third lap they opened the gap. However, it was evident that nobody could catch Potts who flew through the finishing line more than a minute ahead of his nearest rival.

Although there were no incidents during the race there were a number of capsizes after.  First to capsize was Gough, but the Club's Rescue Boat was soon on the scene and the crew, John and Ian, helped bring the Laser ashore.  Next to go over was Potts but he had his Laser up within seconds, whilst Dunnett capsized and found himself rescuing his daggerboard, which came adrift from his Laser as the dinghy came back to the beach. 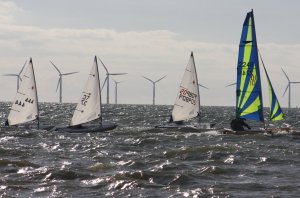 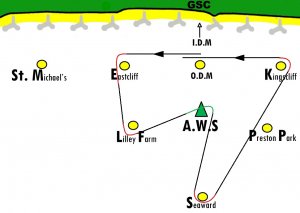 The course that shared a striking resemblance to the previous week! 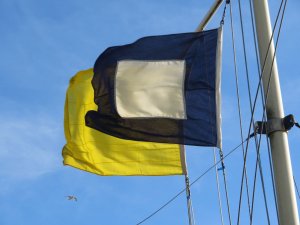 The starting sequence signals fly briskly from the yardarm 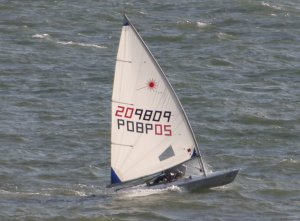 Winner of the third race in the Winter series - Ken Potts 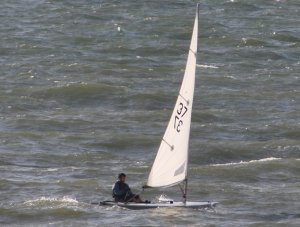 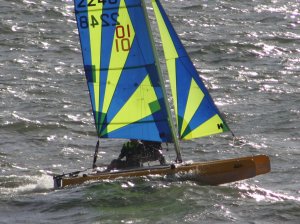