Concentration is the key to success for Ken Potts

Gunfleet Sailing Club, once again, had a very busy weekend over 23 and 24 June.

Another Win For Tappenden 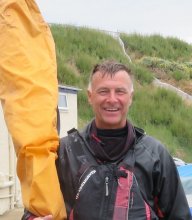 Packing his boat away, after a great race - John Tappenden

Unsettled conditions made for some interesting sailing last weekend at Gunfleet Sailing Club.

Andy And Harry Take The Honours 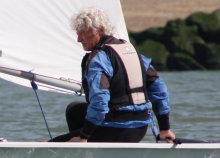 Saturday 9 June saw the second in the Gunfleet Sailing Club’s SOS Sail Training take place.  In a fresh north-easterly breeze the Cadets and Otters formed into three groups – red for novices, yellow for those that can sail but need to sharpen-up their technique, and green for those who sail very capably and want to develop their tactics.  A fleet of Toppers and Topazes were soon rigged on the beach and trainer Clare Williams clearly mapped-out the training programme for the afternoon.

Cadet SOS Sail Training Gets Off To A Great Start 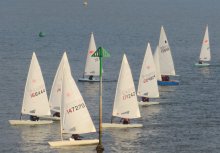 Gunfleet Sailing Club had a busy time last Saturday 2 June when it commenced its sail training programme for the Club’s Cadets and Otters, as part of SOS - Sailing On Saturday.  Organised by Cadet Officer Claire Aylen, and the Club Training Officer Clare Williams, there are to be two four week sessions when those new to sailing learn how to handle a boat on the high seas.  With a host of volunteers to assist, it was good to see ten Topers and Topazes being so efficiently sailed by novices, all showing themselves to be possible future Olympic sailors. 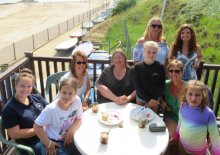 The end of a perfect afternoon for the Ladies Who Launch - scones, jam and cream....Nice

The May Bank Holiday Weekend saw victory for both John Tappenden and Andy Dunnett, both sailing Lasers, as Gunfleet Sailing Club had a full and varied programme of events.

The planned cruise for Saturday 26 May was cancelled with steady rain and a sea mist, but by the afternoon the skies had brightened and sunshine took control.  However, the wind had increased to a force 5 plus, with white caps providing a lovely picture, but from onshore. 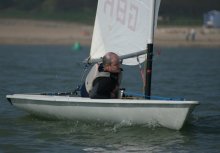 Gunfleet Sailing Club’s Paul Stanton celebrated victory last Sunday 20 May when he won the race for the Wallet Trophy in his Laser. 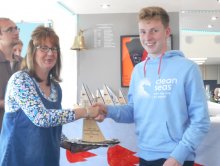 Twenty boats gathered at Gunfleet Sailing Club on the north-east Essex coast for the Class Association Championships over the weekend of 12th/13th May. The entries comprised 16 visitors and 4 home club boats with members travelling from as far afield as Cornwall and Devon in the South and Northamptonshire and Leicestershire in the Midlands. Some members travelled on the Friday and berthed their boats in the Club compound overnight and also took advantage of the cooked breakfast on offer before sailing commenced.

Ideal Conditions Prove A Winner With Everyone 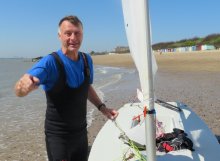 A very pleased looking John Tappenden, even before winning the Hertford County Shield

Gunfleet Sailing Club members revelled in the, almost perfect, weather conditions over the May Bank-holiday 6 and 7 May, taking to the water on the Sunday to race for the Hertford County Shield. 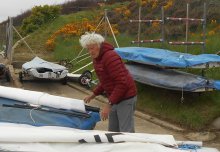 Andy Dunnett prepares his Laser prior to winning the race

Gunfleet Sailing Club held the fifth race in its Spring Series on Sunday 29 April and, despite several capsizes, it was Andy Dunnett that sailed home to the winning gun in his Laser.

With the temperature just 8 degrees, a heavy overcast sky, occasional light drizzle, and a vicious offshore wind, the elements certainly didn’t make an attractive backdrop for those brave sailors determined to take part in the race.  Capsizes started as soon as the craft went afloat and the Club’s Rescue Boat was busy scurrying between boats to check everything was alright.

After two weekends of non-sailing weather, the members of Gunfleet Sailing Club were greeted by sunshine, blue skies and a light breeze for the fourth race of the Spring Series on Sunday 22 April.  It was good to see so many dinghies on the water and for Peter Downer things just got better when he claimed victory. 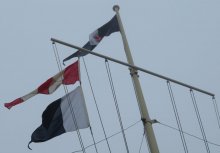 A light breeze is sufficient to lift the postponement flag signal, but failed to clear the mist

For the second Sunday running, on 15 April, the Gunfleet Sailing Club members could only kick their heels in frustration as a heavy sea mist prevented any hopes of getting on the water.

Some more optimistic "would-be" competitors, for what should have been the third race in the Spring Series, began to rig their boats in the belief that the light southerly breeze might just blow the mist away but it became evident that this was not going to happen, at least not in the forthcoming few hours. 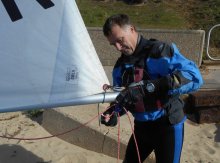 Winner of the first race in the Gunfleet's Spring Series, John Tappenden, preparing his Laser

Gunfleet Sailing Club held the first race in its Spring Series on Easter Sunday 1 April with John Tappenden gaining a convincing win in his Laser.

The weather conditions were typical of the Easter Holidays with a cold, but light, offshore breeze and a somewhat overcast sky; the grey sea adding little to the overall picture. 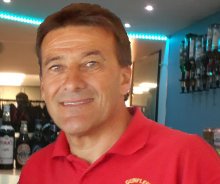 Gunfleet Sailing Club celebrated the start of the 2018 sailing season with its Fitting-Out Supper, last Saturday 24 March, with members filling the Clubhouse for the traditional Fish and Chips meal.  Commodore Richard Walker welcomed all those present and spoke of the ups and downs of the Club over the winter.  The weather had disrupted the cutting-back of the cliff vegetation, and the Work Weekend was postponed a week due to the snow, only to be prevented from taking place the following weekend by further bad weather. 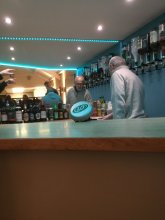 Frank, our Club barman for the night, finds his way round the new bar

Last Saturday evening, 17 February was a double celebration for Gunfleet Club members.  Nucleus Watersports had an amazing sale of wet gear, spray tops, shoes, boots, ropes, elastic....and a trillion and one other things, with prices at absolute rock bottom.  It was also the opening of the Club's new bar, which has been transformed from the 1970's look (when in fact it was built) to the 2018 and beyond.  The Clubhouse was packed and it was a real chance to catch-up with old friends after a long winter.

Work begins on the cliffs as Gunfleet tidies up the tamarisk

Last Saturday 10 February you might have been tempted to pull the duvet over your head and stay in a warm bed for the morning, but fortunately the Gunfleet Sailing Club members are made of hardier stuff.  After stripping off and having an ice cold shower in their back gardens they "hot/cold-footed" it down to the Club, armed with loppers and hedge trimmers, and cut back the tamarisk on the cliffs.  The hot drinks flowed, and our Vice Commodore Dave rolled his sleeves up, put down his welding torch (I am sure someone mentioned brass monkeys) and rustled-up beans on toast to the now ravenous