Gunfleet Sailing Club’s 2018 Regatta, sponsored by Clacton Discount Windows and Conservatories, was hailed a total success by all those taking part, with a wide selection of Trophy winners following a weekend of very enjoyable sailing and fun and games, both on and off the water.

After a free lunch for all the competitors it was on with the water based games; a detailed report of this can be found on the Cadet & Otter section of the website.

In the evening the Gunfleet Regatta Party got underway and members and visitors were soon tucking-in to turkey roll in a large bap, plus stuffing, cranberry sauce, coleslaw, potato salad, a mixed salad, all washed down with strawberry cider, or prosecco, or milk stout (whatever your tipple in fact).  Just when you thought you were full you managed to have seconds, and still find room for a wedge of chocolate gateau.

Sunday dawned, and  the Gunfleet Regatta’s main race day which was open to visiting sailors, and it was good to welcome dinghies from West Mersea, North Herts and East Beds, as well as neighbouring Clacton Sailing Club.  The very light south-easterly breeze proved insufficient for the foiling Moth to be able to rise out of the water, much to the disappointment of the very many onlookers, but the first race, for the RNLI Charity Shield, still made a fine sight.  First across the start line was Andy Cornforth in his Laser, with Dave Fowell and Amy Hart just behind in their GP14, but it was just seconds before Pete Boxer powered his A Class catamaran into a strong lead.  Bunched closely behind was a “gaggle” of Lasers, an RS200, Peter Downer’s Comet, and a couple of Hurricane catamarans.  It proved a pleasant fetch to the Kingscliff buoy, and then a beat out to Seawardd, before a run to Eastcliff, beat back to Seaward and a very broad reach down the coast to St. Michael’s buoy, the flood tide assisting all competitors on the way.  After that it was simply make your way back to the line with another, long, fetch.  On the downwind legs it was good to see so many spinnakers flying, on both dinghies and catamarans, the extra power helping to push the craft forward.  The biggest battle raged between the Laser class with places swapping constantly.  At the end of the first lap it was Sonny Hart in first position in his Blaze, Pete Boxer second in his A Class, and John Tappenden third in his Laser.  Further down the fleet the positions kept changing, particularly as the second lap progressed; the light winds getting even lighter at times.  With the end in sight it was clear that nothing was set in stone and as the race concluded it was Tappenden that just clinched the race.

In the afternoon there was class racing, starting with the catamarans and then, at five minute intervals, it was the turn of the Toppers, Topazes, Comets, GP14’s, 405’s, Lasers, and, finally, the menagerie fleet.  With courses set to suit each class it lead to some super sailing with exciting tussles between competitors.  The biggest disappointment was in the 405 fleet when disqualifications and retirements meant that nobody actually completed the race in their class. 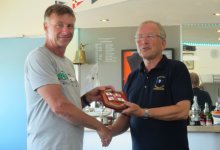 The Morning race required the Catamarans to complete three laps

Competitors get ready for the first race 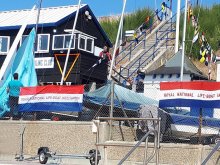 The whole Regatta is aimed at raising money for the RNLI 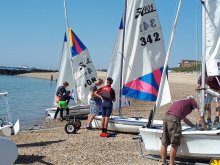 Boats are busy getting rigged

The Toppers had a much smaller course

The Comet Course was a bit more challenging

The GP14 course allowed the boats to use their spinnakers

The 405 course aimed the crews to use their asymmetric kites

A copy-cat course to the Lasers for the menagerie class 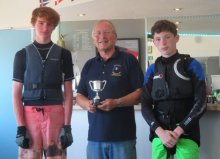 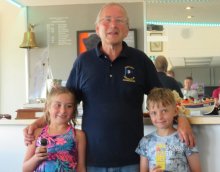 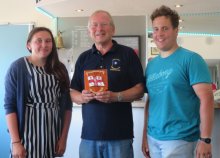 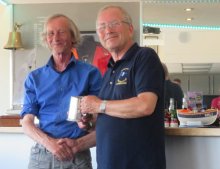 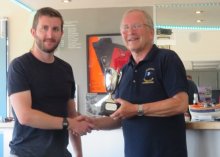 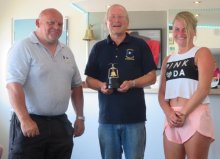 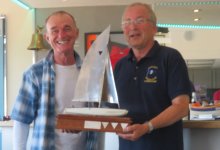 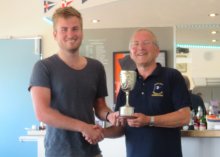 Having come second in the morning race, Sonny Hart takes his Blaze into top spot in the afternoon menagerie race