Gunfleet Sailing Club held its Fleet Championship race, on Sunday 2 September, against a summer’s day backdrop with Andy Dunnett winning the event in his Laser.

A force three, touching four, onshore wind greeted the competitors as they arrived to rig their boats, and with blue skies and unbroken sunshine it looked like the perfect sailing conditions, but as the time got nearer so the wind dropped in strength.  John Tappenden’s RS Aero got the best start as the fleet sailed close-hauled up the coast to the Kingscliff buoy, with Eddie White, in his Laser, just behind, and Dunnett a little further back but staying close to the shore to dodge the freshly flooding tide.  Tappenden was first to round the mark, with Sonny Hart alongside him in his Blaze.  It was then a beat out to the Seaward buoy with Tappenden taking one course and Hart the other.  However, it was Hart that was first round the offshore mark and quick to run to the Eastcliff buoy.  A little further back there was a cluster of Lasers, and refusing to leave them alone was Peter Downer in his Comet; some of the competitors finding it quite a challenge to stem the strengthening tide as they headed out to sea.  Once back inshore it was another beat, this time around the AWS buoy and back out to Seaward, before a very broad reach down the coast to the St. Michael’s buoy and a fetch back through the line.  As the race proceeded, so the wind got lighter and the tide stronger, and for Yvonne Gough it all got too frustrating, so she retired back to shore in her Laser.

The Officer of the Day could see that the race was becoming quite a tortuous afair and, having sympathy on the competitors, hoisted the shorten course flag, resulting in the need to complete just one lap.

On the Saturday the Club held the penultimate race in its Cadet SOS – Sailing On Saturday Class Points Series with a strong fleet of Toppers and Topazes taking part.  There was, once again, some excellent seamanship and of particular note was Lauren Hooper in her Topper who looked, at one point, as though she would win.  In the end, victory in the Toppers went to Harrison Smith, in the Topaz fleet, to Thomas Aiken and George Smith, and in the Menagerie fleet to Tom Philpot in his Laser. 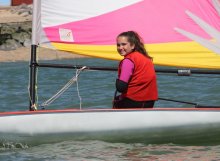 Lauren Hooper was destined to do well in her Topper 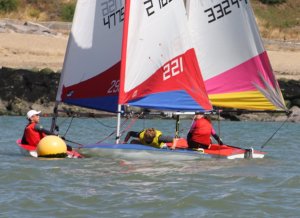 Some close tactics around the course

The Fleet Championship, on the Sunday, had quite a full course