A Race Full Of Incidents

A grey north-sea and force four gusting five easterly winds greeted the members of the Gunfleet Sailing Club when they arrived last Sunday 10 October to take part in the race for the Tee Dee Challenge Cup.  The conditions created a lively sea and this deterred a number of entries but there were still thirteen boats that took part.  In a closely bunched start it initially looked as though it could be anybody’s game but pulling ahead early on was Paul Stanton in his Laser; however this was short-lived when he capsized and, more seriously, caught his feet around the mainsheet.  However the Club Rescue Boat was soon on the scene, but having received outside assistance he was required to retire.  The rest of the fleet beat up the coast against a strong flood tide and swept around the Kingscliff buoy before taking a very broad reach back to the AWS buoy and then fetching out to the Seaward mark.  It was at this point that the competitors really appreciated the size of the waves and this forced a few more retirements.  The run from Seaward to St. Michael’s buoy resulted in some capsizes with Simon Mathewson being an early victim in his Vortex, but for some the conditions were perfect.  Ken Potts, flat out on the wire in his RS600, simply motored along and had completed the first lap in record time.  Slightly further back his 600 colleague Kelvin Morton was having less success and found himself nose-diving his craft into one of the waves with interesting results.  Cadet Matt Downing found himself overpowered in his Contender, despite some excellent trapeze work, and retired back to the beach; and at this point it began to seem as though the conditions were gradually picking off the competitors one at a time.  Determined to hang on to the bitter end was Mark Venables in his Solution but fate played its part when shortly before completing the race his tiller extension pulled away and was lost at sea.  With seriously restricted control of his boat he could do nothing more than lower his sail and receive a tow back to the shore from the Rescue Boat. 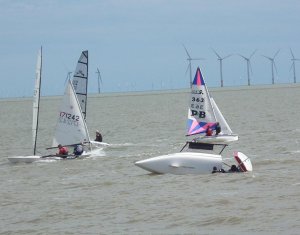 Paul Davis revels in the conditions at the start of the race, but was later forced to retire 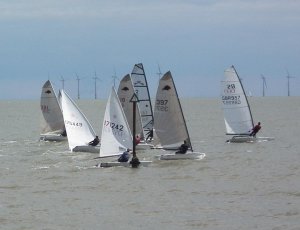