Last Sunday 26 September members of the Gunfleet Sailing Club took part in the second race of the Autumn Series.  The sky was heavy with grey cloud and there was a force five gusting six offshore wind and shortly before the start the heavens opened up bringing torrential rain.  This did however have a calming effect on the wind which subsided for a while.  Just after the start Andy Dunnett capsized in his Laser, followed by Ken Potts in his RS600, and this gave the opportunity for Simon Mathewson to take the lead in his Vortex which he kept on the reach to the Kingscliff buoy and then out to the Seaward mark.  Mathewson was then challenged by Simon Clarke in his Solution and they remained neck and neck until the Eastcliff buoy when Potts overtook them both.  Slightly further back the Lasers were having their own battle with Paul Stanton leading after the first lap but Dunnett continuing to work hard to make up for lost time after his early capsize.  Although he failed to get ahead of Stanton, Dunnett was just one second behind him as both boats crossed the finish line, followed by Yvonne Gough.  Having successfully sailed around the course without going over Cadet Commodore Sonny Hart flipped his Solution as he went across the finish line and found himself perched precariously across the hull and centreboard, but still remaining dry. 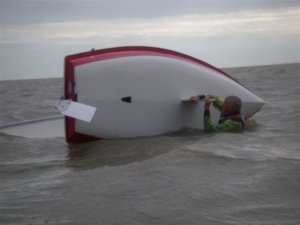