The Club’s Treasurer Peter Downer presented the year-end accounts and was pleased to report that membership fees and boat spaces had increased, also the generous sponsorship of the Club’s Weather Station, Regatta, and Cadet week, by Nucleus, Discount Windows and Conservatories, and Orsted Energy respectively.  The donations had seen quite a healthy increase and once again the Club had benefited from Tendring District Council’s Community Asset Rental Offsetting Scheme.  On the expenditure side there had been the re-roofing of the pagoda and buoy locker, the purchase of some 4.2 training sails for the Club’s Topper dinghies, and a new engine for the smaller Safety Boat.  Overall he was pleased to report that the Gunfleet was in a healthy financial position.

Sailing Secretary Derroll Pedder looked back at a successful sailing season with an increased Wednesday evening racing series, a well attended Regatta day, and the new Pier 2 Pier Race which was held jointly with Clacton Sailing Club.  Member John Robertson was specifically thanked for the role he took as the Club’s main Safety Boat Skipper, being at the helm for almost every race.  The new system of rescheduling postponed races had been a trial run and had proved to work extremely well.

The social side of the Club had seen a good mix of popular traditional events, and new ideas, and had been enjoyed by a wide range of members.  The Fitting-Out Supper, in the Clubhouse, and Laying-Up Dinner, at the Kingscliff Hotel, both proved popular with sailors and landlubbers alike.  As well as social functions, there had been a lot of time and effort in providing refreshment at key sailing events, as well as the Work Weekend and Cliff Clearance.

The Chairman of the Directors of Gunfleet Sailing Club Ltd., Malcolm Jolly, gave an overview of the strategic role the company had taken, as well as the overseeing of the finances, but was quick to assure members that the Directors were often rolling their sleeves up at some of the messiest jobs. 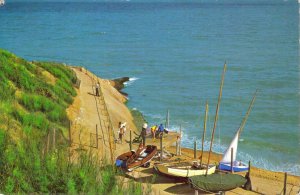