Gunfleet Looks Back Over Another Successful Year

Gunfleet Sailing Club held its Annual General Meeting last Sunday, at the Clubhouse, when Commodore Richard Walker looked back at another busy and successful year for the Club.

The year had seen refurbishment of the Club’s bar, ongoing replacement of the fence posts around the perimeter of the boat park, a new roof on the changing room, and the purchase of two new Club Topper dinghies for the Cadet section.  All the members had been kept up to date with the quarterly Club magazine, paper newsflashes, the website, emails and Facebook; all ensuring an inclusive feel to the Gunfleet how ever often members were actually able to visit.

Club Treasurer Peter Downer then presented the accounts for the year and highlighted the healthy income position, with a number of donations, sponsorship of major events, and an increase in surplus on both the bar and the galley; the expenditure remaining constant with previous years..  The Cadet Toppers had been completely funded by money raised by the Club’s young members and the 2018 Regatta had seen over £250 presented to the Clacton Lifeboat Station.  Downer concluded by showing that the Club remained on a sound financial footing.

Sailing Secretary Derroll Pedder reported on the wide mix of water-based events, including the Comet Class Association Championship, hosted by Gunfleet, the Regatta, Club racing, and organised cruises.  The weather, despite being good for the landlubber, had caused quite a disruption to the planned programme but members had worked round this.

Rear Commodore Helen Swinbourne thanked her House and Wines Committee, and all the helpers, that had made sure members had enjoyed a wide and fun-filled social programme.  As well as the traditional Fitting-Out Supper, Laying-Up Dinner, Regatta Party, and Cadet Week Party, there had also been a good mix of events for all tastes and ages.

A full and varied programme had been organised for the Cadets and Otters, both on and off the water, with Sailing On Saturday, Cadet Day, Sail Training, and culminating in the 2018 Cadet Week.  The Club officially recorded its thanks to retiring Cadet Officer Claire Aylen. 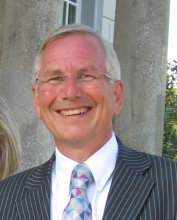 Heading to his 25th year as Gunfleet Commodore - Richard Walker