A Battle Of The Lasers

Weather conditions were “fresh” as the sailors rigged-up, with a force four gusting five southerly wind and typical November temperature.  This actually deterred a number of would-be entrants that came down with good intentions but thought better of it but, ironically, as the dinghies launched into the choppy North Sea so the wind eased down to a force three gusting four.  At the start it was a tight bunch of Lasers leading the way with Potts, Andy Dunnett and Yvonne Gough all surging forward as they headed down the coast to the St. Michael’s buoy, fighting an ebbing tide.  Eddie White, in his Laser, had to return as he jumped the start whilst Andy Cornforth was rather slow off the mark, in his Laser, and Ed Philpot and crew were also having to play catch-up in their 405.

The angle of the wind meant sailing close hauled to the windward mark before a broad reach back up the coast to the Eastcliff buoy, the tide now under them.  At this stage the strong Laser fleet was struggling to throw-off Derroll Pedder and Michael Gutteridge who were sailing their GP14 at its peak.  Once round Eastcliff the helms hardened-up on what was thought to be a fetch out to the Seaward mark, but such was the strength of the tide it was clear that this leg had turned into a beat; every opportunity being taken to point higher in an effort to narrow the gap between places.  By this time Potts had pulled ahead and, sailing a very clean course, looked to be in a comfortable position.

Once round the offshore mark it was a run towards the shore and the Kingscliff buoy.  On this leg disaster struck for Cornforth who lost his mainsheet, a knot presumably working loose.  All he could do was hove too, as best he could, and put things right, in the meantime watching competitors slip by.  After rounding Kingscliff there was a beat to the AWS buoy and a reach back to Kingscliff before sailing through the line.  At this point Potts had a clear lead and he went on, in the second lap, to strengthen his position and claim one of the oldest trophies in the Club.

The course for the Tee Dee Trophy 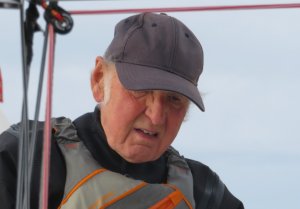 An inspiration to us all, Eddie White, at more than four score years, gets ready to launch his Laser in the race for the Tee Dee Challenge Cup