Top Of The Potts

Gunfleet Sailing Club’s members were on their toes last Sunday 20 August when they took part in the race for the oldest Club trophy - The Tee Dee Challenge Cup - due to the variable winds, both in direction and strength.

As the competitors rigged, the force four westerly wind started to fall-away, and swing south-westerly, before returning to the west.  With a strong ebbing tide the helms had to stay close to the line so as not to find themselves being swept back towards Frinton.  Right on queue, as the class flag fell from the yardarm and so signalled the start, Ken Potts and Eddie White, both sailing Lasers, were away on starboard tack; having both been next to the Inner Distance Mark.  It wasn’t long before they tacked in towards shore to mitigate the negative tide, as they beat down the coast to the Eastcliff buoy.  The rest of the fleet followed but unfortunately Cath Bicknell, in her Comet, found herself quite far from the line and it was several minutes before she managed to cross it, immediately putting her at a strong disadvantage.   On the second leg, a reach out to the Seaward mark, Potts pulled away, and it wasn’t long before he had gybed round the buoy and was heading to the Kingscliff mark; White worked hard to close the gap but sadly in vein,.  By this time the wind started backing south-westerly again, but constantly changing its mind, and regularly veering westerly.  Depending which point of sailing the competitors were on, these shifts could either lift the boat towards, or away from, the next mark .  For Potts, heading from Kingscliff to the AWS buoy and then out to Seaward, luck appeared on his side and he was soon round the offshore buoy and heading back to Kingscliff.  Quite a lot further back Bicknell had pushed past the other competitors and started to look quite strong, eventually gaining a second place, just in front of Harry Swinbourne and Jess Mclean-Wright in their Topaz.

The previous Wednesday  evening, in almost perfect conditions, boats took part in the final race of the Tony Chadd Series.  With some superb reaches over a small course it was the Lasers that took the top three places, giving Potts, Andy Dunnett and Yvonne Gough fist, second and third respectively; this result cementing Potts’s overall success in the series. 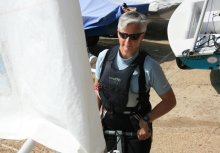 Having had a really bad start, Cath Bicknell sailed her Comet into second place

The course for the Tee Dee Challenge Cup 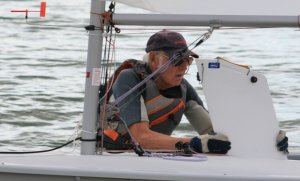 Eighty year old Eddie White, who is fitter than many people half his age, had a great start in his Laser 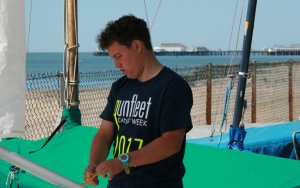