Ken Concludes The Winter Series With Another Win

Gunfleet Sailing Club held the concluding race of the Winter Series last Sunday, which was also the final race of 2016. The blue sky and sunshine helped to mask the cold easterly wind which was blowing between force four and six.  At a rather scattered start, Ken Potts in his Laser was the only competitor to be right on the button, heading up the coast to the Kingscliff buoy in almost total isolation.  At just the wrong time, Andy Dunnett suffered with gear failure on his Laser but stayed at sea to fix things before chasing after the rest of the pack which, by this time, were well ahead of him.

The second leg, a reach out to the Seaward buoy, gave the opportunity for the fleet to really fly, the flooding tide helping the boats on their way.  Everyone handled the gybe well, at the offshore mark, and then it was a broad reach into the Eastcliff buoy.  The helms just had time to get their breath back before a beat out to AWS and then a run back to Eastcliff; the final leg being a close haul back through the line.  As the dinghies went round the Eastcliff buoy for the first time it was noticeable that Rob Lockett was handling his Laser especially well and was level-pegging with Derroll Pedder in his Solution.  By the time the two had made the AWS mark Lockett had gained a good lead but unfortunately he then headed back out to the Seaward buoy, in error, whilst Pedder and the other competitors correctly ran back to Eastcliff.

At the end of the first lap it was of little surprise that Potts was leading, but further back things weren’t quite so black and white.   Positions changed, then changed again, and just as Lockett looked to be making a comeback he capsized and allowed Yvonne Gough in her Laser to move up a place.  Determined not to be at a the back of the fleet after his terrible start, Dunnett had been picking-off his rivals, one at a time, and by the end of the second lap was lying in third place, just behind Pedder; Potts convincingly taking both the race and the series overall.

This was followed, in the afternoon, by the Gunfleet Sailing Club Annual General Meeting.  Commodore Richard Walker reported on another very successful year, and looked at, amongst many things, Tendring District Council’s CAROS scheme which he reminded members was an opportunity for the Club and not a right; to date the savings had been used to pump-prime many improvement projects that would assure the Gunfleet’s longevity within the community.  There had been a few issues with the new beach, primarily teething troubles, but with Tendring District Council’s assistance solutions had been found and implemented.  The Club had agreed a new 25 year lease with its landlord which would now open-up the opportunity to apply for possible grants.  Over the winter there would be a programme of compound resurfacing, and fence posts replacement.  The Commodore ended his report with a special mention of the Cadets and Otters, the future of the Gunfleet, and went on to thank his fellow Committee members for their support and hard work over the last year.

Treasurer Peter Downer took the members’ through the accounts for 2015/16 which showed a healthy income, resulting in a strong bank balance.

Vice Commodore Dave Fowell outlined the sailing activities in 2016 and thanked David Foster of Mistley Marine for his kind donation of a very large Seaward buoy.  The racing had gone well, with all the fixtures being concluded.  The cruising had, unfortunately, been hit by bad weather but the sail to St. Osyth, and the Moonlight Cruise had both been well attended.  The Comet Open, and 405 Splash, had both been very successful despite strong winds.  The Gunfleet Regatta had also felt the effect of the strong winds but the lively conditions proved a challenge to the competitors and quite a spectacle to the onlookers.

The Club’s Rear Commodore Jon Meggison presented his report on the land-based activities of the Gunfleet, with a real mix of new and traditional events, culminating in the Laying-Up Dinner and Dance that attracted 75 members.  This was his last report as Rear Commodore as he was stepping down from the post after seven years on the Committee, six of them in his current position, and the Club members showed their appreciation of all his, and his wife Linda’s, hard work.

The meeting then concluded with the election of Officers to the Committee, as follows: 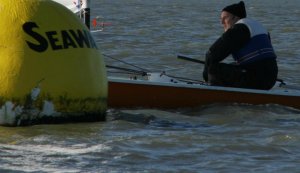