Once Upon A Strong Tide

On a slightly overcast Sunday afternoon the Gunfleet Sailing Club held its race for the Fleet Championships when thirteen boats took part.  Despite a force four southerly wind the very strong ebb tide made the first leg, to the Eastcliff buoy, a long and fairly tortuous affair.  Once round this mark the boats made reasonably quick progress out to the Seaward buoy before heading on a run into the Kingscliff mark.  There then followed a very slow beat back out to sea and, with a falling breeze, this took the utmost concentration of the helms to ensure they got their craft around the offshore buoy.  A second run then ensued as the boats headed back to Kingscliff before another beat back through the line.  After a fine start Andy Dunnett in his Laser lead the rest of the fleet and maintained his position as the class leader, whilst Paul Davis played a similar role in the Solution class.  Neither party was strong enough to take the top spot however, and it was John Tappenden in his Blaze that had gained a good lead at the end of the first lap; managing to build on this in the second and final lap.

Results – Fleet Championships:
1. Blaze – John Tappenden
2. RS600 – Ken Potts
3. Solution – Paul Davis
The previous day had seen the last of the Cadet and Otters’ Sailing On Saturday, with the final race of the Topper, Topaz and Menagerie Series.  First away was the Topper fleet with Robert Gutteridge taking an early lead, despite being pushed by Tommy Martin on the first leg.  As the boats headed out to the Seaward mark Gutteridge pulled away and took a convincing victory.  Five minutes after the Toppers had started it was the turn of the Topazes and this turned into a real battle between Bethany Ford and Aaron Baker, with lead position changing as the race went on.  On the long beat down to St. Michael’s buoy it was Ford that slipped ahead but after then, after heading out to the Seaward mark, Baker gained the lead on the reach to the AWS buoy, increasing the gap as time went on.  Fighting it out for third position was Bethany Elliott and her crew Fabio Sanchez, the two sailing particularly well.
Results – Sailing on Saturday Overall:
Toppers:
1. Robert Gutteridge
2. Zak Kurtulus
3. Tommy Martin
Topazes:
1. Aaron Baker
2. Bethany Ford
3. Charlie and Harry Spence
Menagerie:
1. Tres – Bethany Ford
2. Hobie 405 – Conor and Finlay Williams 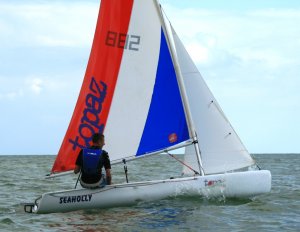