A fresh force four, touching five, south-westerly wind greeted the competitors and the first class to be unleashed was the Topper fleet.  Harrison Smith led the boats on port tack as they beat down the coast to the Eastcliff buoy, with Alfie Searles hot on his heels.  Aware that he had the tide under him, Seales quickly went about and headed out to sea, on Starboard tack, in order to gain full advantage.  Finding conditions slightly overpowering, Kees Levine, shortly after the start, made the wise decision to retire back to the beach.  Once round the Eastcliff buoy it was an exciting reach out to the Seaward mark, followed by a quite vicious gybe, before heading in to the AWS buoy.

Meanwhile the Topaz class got underway, followed by the 405’s, the latter fleet revelling in the strong winds.  However, the excitement lay particularly with the Toppers, with some fierce competition amidst the friendly rivalry.  After AWS it was a short beat down to Eastcliff before a dead run up the coast to the Kingscliff buoy and finally a beat back through the line.  It was on the run that Ted Newson capsized his boat and within seconds it had turtled.  With the Club Rescue Boat standing alongside, Newson righted his craft in a short space of time and then had the task of rebuilding his position in the fleet.

Capsizes were becoming quite a regular occurrence in the other classes and it almost became a common sight to spot a 405 on its side, whilst the Topaz fleet faired a little better.  A noticeable capsize in the latter class was when Thomas Aiken, and his eight year old crew George Smith, went over at the gybe mark.  In true professional seamanship style, Aiken righted his Topaz and, in doing so, scooped George into the boat at the same time.  This speedy response allowed the two to maintain their lead and, after two laps, take the winning gun in their class.  405 victory went to Ed Philpot and crew Henry Spooner, who spent most of the race hard out on the trapeze, whilst Harrison Smith took top spot in the Topper fleet. 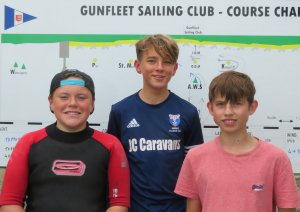 The top three Topper sailors in the second SOS class race. From left to right: Alfie Searles who cam second, Harrison Smith who won the race, and Ted Newson who came third. 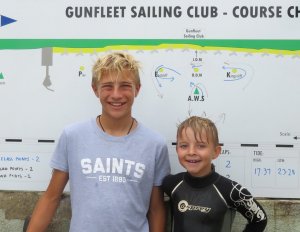 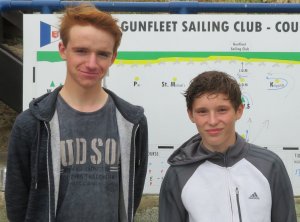 The Topper Course, including the dead run

A more traditional course for the Topazes

The 405 class gave some opportunities for kite flying - if you dared! 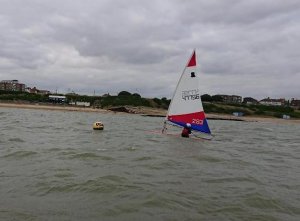 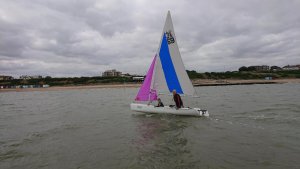 Thomas and George look to be enjoying themselves 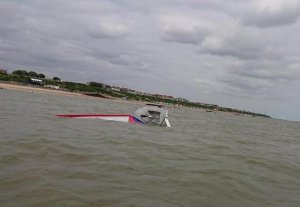 Ted ends-up in the drink 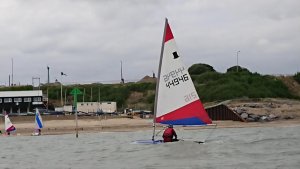 Alfie takes a convincing second place in the Toppers 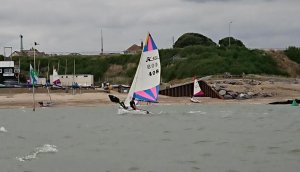 Henry takes it easy - laying flat out on the trapeze