Cadet Week and It Just Gets Better Every Day

Monday:  Gunfleet's 2010 Cadet week started in fine style on Monday 23 August with over 40 Club youngsters taking part.  Although the wind was very strong and the sky overcast for much of the day it didn't prevent the Cadets and Otters from getting on the water.  However, before they were cast afloat the novices learnt to handle a boat on dry land as they sailed their Toppers on the greensward.  As they pulled the sail in and out, and moved the rudder about so the boats reacted as though they were on the water, thanks to the more experienced sailors simulating a response.  Meanwhile the more experienced sailors undertook some bodysurfing in the wild seas.  Then, by chance, the wind abated just a bit and the more skilled Cadets took the younger and less experienced Cadets and Otters out to sea for a blast in Topaz dinghies.  Unfortunately, with the Coastguard giving a forecast of force 5 to 7 gusting 8, the Moonlight Cruise planned for Monday evening had to be cancelled.

Tuesday:  And if we thought Monday was windy...well today the wind hit 42 knots (that's Force 9!!) and that put paid to any sailing, even on grass.  Before lunch it was everyone onto the green in front of the Commodore's house for a game of Bulldog - the youngsters versus the Cadet Committee, followed by a game of Rounders with Cadet Vice Commodore Matt's Team beating Cadet Commodore Sonny's Team.  After lunch the less experienced aimed to do some Topper sailing on grass but so strong were the winds that the helms were capsizing!!  So it was everyone in the water for some surfing and body-boarding, but the waves were very powerful; areal challenge to the 45 Cadets and Otters of Gunfleet Sailing Club.  Fingers crossed that Wednesday brings lighter winds plus a drop of sunshine.

Wednesday:  Well one out of two isn't bad...the wind was a great force two to three but the sky was overcast and it did start to spit with rain.  However, all the Cadets and Otters got out on their boats and there was a fleet of Toppers and Topazes on the water, plus a Laser 3000, Qba and a Topaz Tres - some 17 boats in all.  Under the watchful eyes of the two Club Rescue Boats the 40 plus young members had a great time with only a few falling out their craft (deliberately!!).  Part of the afternoon was used to sharpen sailing skills and many of those new to the sport are really picking-up the finer points of helming a boat.  There is just one problem appearing as the week goes on and that is the limited space in the changing rooms, resulting in a bit of a queue at the end of the day; but hey-ho it is a fantastic opportunity, whilst waiting, to discuss tactics.

Thursday:  Force 6 winds and an overcast sky; well it is the first day of the Clacton Air Show!!  Once again the Club Cadets and Otters are frustrated by the poor conditions, but not despondent.  First things first, so the boats are all lined up on the promenade and got ready for sailing, followed by a magnificent lunch and then....the wind freshens; so the younger Club Cadets, along with the Otters, have another go at Wave Dodging whilst the older Cadets go on foot to Clacton in order to explore the Air Show attractions in more detail.  Oh well, Friday can only get better, weatherwise......

Friday:  And yes there was a slight improvement on the weather front.  A northerly Force 4 to 5 gusting wind and, you guessed it, grey overcast skies greeted the Club Cadets and Otters but at 12:30 p.m., as the Red Arrows roared overhead, so the Toppers and Topazes headed out to sea.  The fleet headed down to Clacton Pier on the last of the flood tide and as they returned so the swell around the Club ramp became extreme.  Thanks to the magnificent work of the shore party the boats all landed safe and sound, and everyone retired to the Clubhouse for a tasty lunch.  Such were the size of the waves that it tempted the youngsters back into the water for a swim, and this was followed by a Tug-of-War on the green opposite the Club.  This time it was Sonny's Team that was victorious over Matts, but when it came to the girls versus the boys it was the female of the species that proved the stronger (don't tell anyone that some mums took part though).

Sunday:  A massive "End of Cadet Week Party" takes place in the evening with over 80 people being present.  The barbecue is in full swing, the raffle has more prizes than items available in Harrods, and every Cadet and Otter receives a special Gunfleet 2010 Cadet Week T-shirt plus certificate.  Cadet Commodore Sonny Hart thanks all those that helped during the week, and in particular Cadet Officer Andy Ford who ]put such a large amount of work into making the whole thing such a success.  The youngsters then partied for the rest of the evening and everyone had a great time; eagerly awaiting the 2011 Cadet Week. 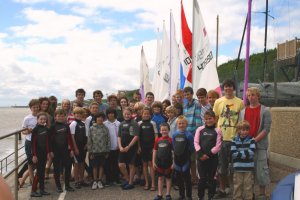 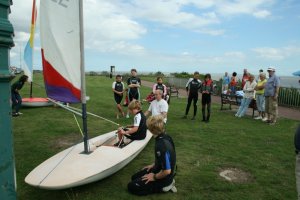 Hey, it can be quite lively sailing on the grass!! 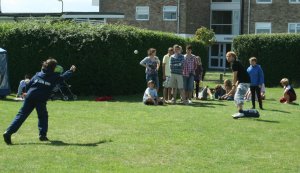 In a Force 9 there is little you can do but play rounders, unless... 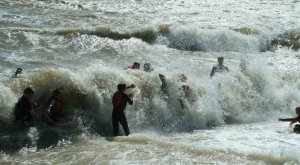 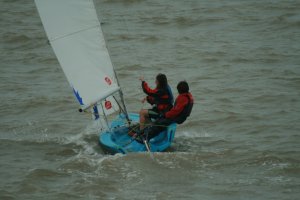 Ben and Bethany get to grips with their Topaz Tres 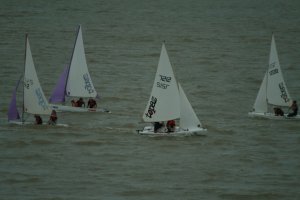 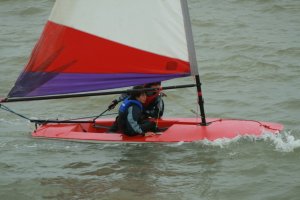 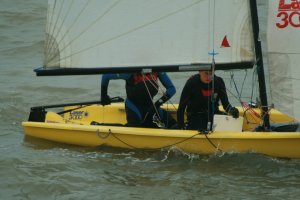 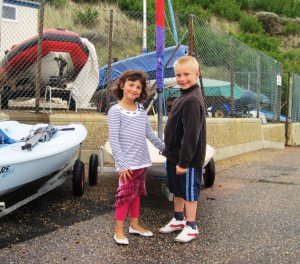 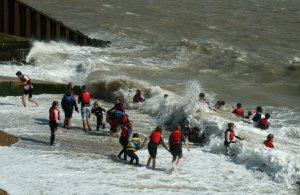 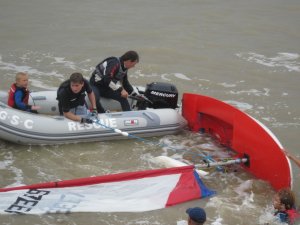 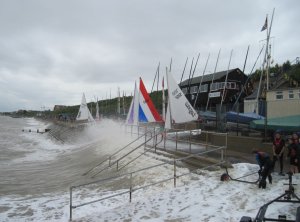 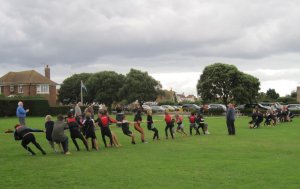 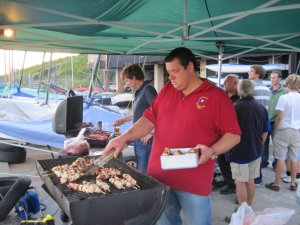 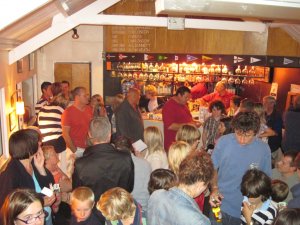 The Clubhouse is buzzing with a large overspill into the compound 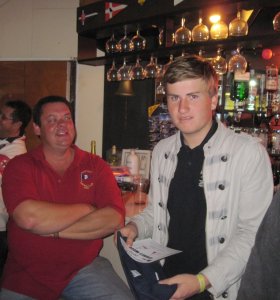