Cadet Week - And It Just Gets Better

Monday:  Sunshine and a force three to four southerly wind meant a BRILL start to the Cadet Week.  First we had a race – well three actually; one for the Toppers (11 of them), another for the Topazes (6 of them), and a third for the Menagerie fleet (405, Tres, Laser, Witch).  After some great battles (and a few forgotten bungs!!) it was Zak Kurtulus that took gold in the Toppers, Charlie and Harry Spence got gold in the Topazes, and Conor and Finlay Williams achieved gold in the Menagerie Fleet in their Hobie 405.

After triple sausage, mash and peas for lunch, plus a great choice of fruit, it was Numbers-Up.  In seventeen boats we chased after plastic bottles with different values printed in them and from the start it was “the winner takes it all”.  Crews jumped in the water and swam for them, and some even tried pirate raids on their rivals.  At the end of it all the highest score went to Robert Gutteridge and Mac Symmonds with no less than 1,900 points, followed by Conor Williams and Abigail Hayes with 1,600 points and then Zak and Lydia Kurtulus with 1,500 points.  A quick stop for a drink and some cakes – well, loads of cakes really, and then it was up on the greensward with the Club Topazes and a mad race where we de-rigged the boats, went over ropes (yes, including the boats and the trolleys), put everything through tyres (well of course not the boats and trolleys – silly), under ropes, and then re-rigged them at the other end.  After a real knockout (in more ways than one) the winning Team was Charlie, Harry, Emily, Conor, Frankie and Dan – well done lads (and lass), we’ll get you next time – Grrrr.....Roll-on Tuesday!
Tuesday: More sunshine, a great force 2 south-westerly wind, and we were off on our cruise to Jaywick for a picnic and a load of games. We all had to beat down the coast which was pretty cool, until Beth Ford’s mast fell down on her Tres (who didn’t tighten the shroud shackle then?), Rescue Boat 1 soon towed her to the beach and good old Dave sorted it all out. When we got to Jaywick Sands there was a huge picnic waiting for us all – sandwiches, crisps, loads of fruit, chocolate bars, cakes and drink; yes we were full, but found room for some chocolate covered doughnuts – what gannets some of the boys are. Then it was on with the games; in the sea...on the sea...under the sea...what a larf!!! Not sure what Frankie and Dan found in the dunes but it wouldn’t fit on the boats. Suddenly it was time to jump aboard and head back to Gunfleet, a relaxed run home for most of us; although Ted and Robbie decided to capsize just past the Pier. Having pulled all the boats up the ramp it was time to have a few more cakes and a drink before heading home.....Wednesday here we come.

Wednesday: Well we’ve got a bit of wind!! Cripes, the racing was lively. A few of us capsized, a few of us had technical problems, a few of us retired, but several of us just kept on going. WOW it was lively at times; especially when we had to gybe, twice, at the Seaward buoy. And who got the Golds today then? Well, in the Topper class it was Robert Gutteridge, in the Topazes it was the Spence boys, and in the Menagerie Group it was the Williams lads in their Hobie 405. Back to the beach straight after and some wild games in the sea, before suddenly it was time for lunch (tonnes of it, and all really tasty). Then, in the afternoon we had some absolutely wacky games...did someone say games; it was more like water torture (only joking). Game 1 was climbing the Topaz mast and there were several movers and shakers (literally). Zak Thomas probably got the highest but we all ended-up in the drink! Then there was “violence on a Topaz”! when we took it in turns to hang onto the mast while the boat was jerked from side to side. Little Frankie just wouldn’t let go and in the end they had to chisel his hands off the mast. Next came “kiss the bow”, another lesson in Victorian cruelty! With the boat on its side in the water we all had to slide along the gunwale to the pointy bit (bow) and plant a kiss on the stem. Well one or two of us managed it. Finally it was an attempt to break the record for the number of people on a Topaz. We got 18 last year but this year we nudged it up when we reached 19, and then promptly capsized. It was just time for some cake, more cake and then, oh go on, a bit more cake, before we dived back into the sea and finished the day off getting everyone soaked...Neet. Look out Thursday, we are on our way.

Thursday: Blue skies, bright sunshine and a really good sailing breeze. First stop is the race, the third in the series, with Tommy Martin leading from the start in the Topper fleet but only for Robert Gutteridge to slip ahead half way round. In the Topazes it was an early lead for Eleanor Margetts and Fabio Sanchez and they just pulled ahead as the race went on, although the Spence boys did well to push through the fleet after a bad start, and claim second place. In the Menagerie fleet it was Beth Ford and Emily Cossens that won this, quite convincingly, in their Tres. There then followed some tactic training before lunch when we all woofed down jacket spuds with a choice of fillings, followed by a sugar surprise!! The wind had freshened by now, into a force 5, so we grouped together to head up to the Air Show in Topazes. It was quite lively so we just sailed around the fleet of yachts moored off West Beach and then ran back to the Club. Time for cakes; crikey there are thousands of them! We woddle back to the beach and hey, there’s a swimming race; two courses, a short one for the Otters and a longer one for the Cadets. First boy home is Connor Williams and first girl home Maddie Wyss, but hang on, there’s our Cadet Officer Barry swimming with us all; oh, he’s helping some of the tiddlers to get round the course – nice one boss! Crikey! More games – collecting the numbered tennis balls; odds verses evens and if you get a ball you don’t want you chuck it out still further, now that’s a good game. What! It’s nearly time to go home but let’s grab a bit more cake first. Friday tomorrow; the end of the week; it’s gone far too fast.

Friday: Another great day with blue skies and sunshine again, plus a light south westerly breeze. If it’s morning down the Club then it must be race time. A bit of a bigger course today with a dead run as well as a beat, reach and fetch (crikey we’re picking-up this sailing jargon!) and first away is the Topper fleet. Once again it’s a battle between Robert and Tommy but Robert got ahead half way round again and took the race, and the overall series, so winning the Swallow Trophy. In the Topazes it was the tightest start you could have seen and yet again Harry and Charlie Spence romped home to victory, despite some tough competition from Aaron and Harrison; the Spence boys gaining first overall and therefore the Amazon Trophy. In the Menagerie fleet it was Bethany and Emily in the Tres that fought off Conor and Finlay in their Hobie 405 to gain a first place, but overall it was the Williams brothers that won the series and took the Long John Silver Shield. We were then just about to have chicken-burgers and chips for lunch when the Red Arrows decided to pay us a visit – hey, how cool is that? After lunch we all sang Harry Birthday to Happy (oops – that should be Happy Birthday to Harry) and had a piece of his birthday cake – nice! Then it was the egg throwing competition and in many cases the yolk was on you! Then we stocked-up on some more cakes and drink before playing Watery Wordsearch; who put down the word MINGER? Golly, there were more of us in the water, swimming from the boats to try and find the bottles with the right letters in, but it was great fun. The first Team back seemed to be crewed by a load of professionals, but nobody came back dry that’s for sure. Still more cakes and time for a swim before we pack the boats away after a fantastic week. Mind you there is still Cadet Day tomorrow, the Club Regatta on Sunday and then, that evening, it’s prize-giving and a Hog Roast at the Cadet Party – What a BRILL time.

Sunday: It’s the Cadet Week Party – and crikey there were 106 meals served....how do they do it? The three trophies got presented to the winners of the racing during the week so well done Rob in his Topper, Charlie and Harry in their Topaz, and Conor and Finlay in their Hobie 405...where were the girls? What a great party, we all got a “goody pack” which included a special 2012 Cadet Week T-shirt and a commemorative Olympic Sailing Coin; all together in a personalised folder...hey, how cool is that? Well, we surprised the key helpers with some gifts for them and Cadet Vice Commodore Robert and Cadet Rear Commodore Aaron presented them; after Cadet Commodore Matt had thanked everyone...how surprised were they? We all want to say a very BIG thank you to our Cadet Officer Barry Peters for a real BRILL Cadet Week – the best ever; we can’t wait for next year...can we? 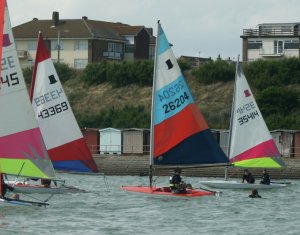 The Toppers "going for gold" in the morning race 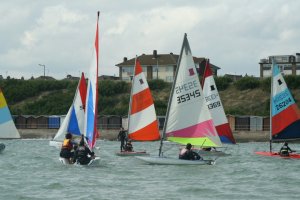 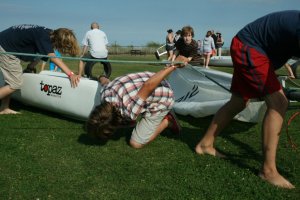 The really crazy way to handle a boat - on grass!! 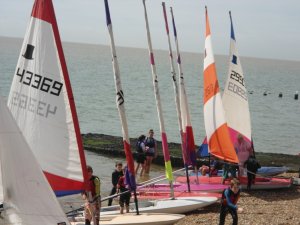 Getting ready for our cruise to foreign lands 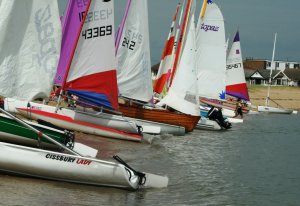 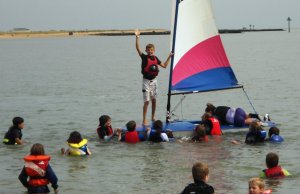 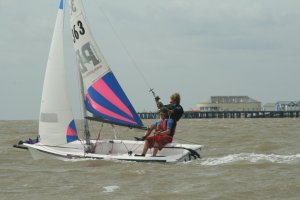 Team Williams racing in their 405 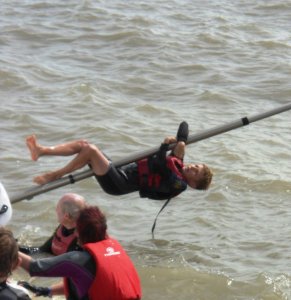 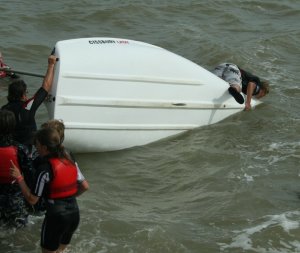 If this is what kissing is all about, I am having none of it 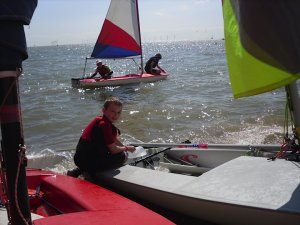 Korben prepares the Topper for the coming race 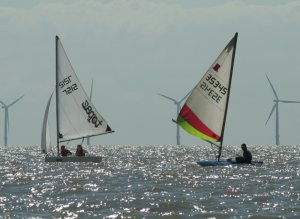 The leading Topper and Topaz in the morning race 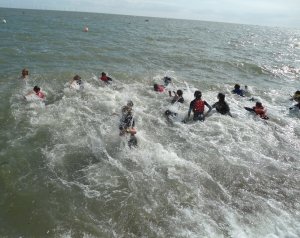 The Swimming Race kicks off 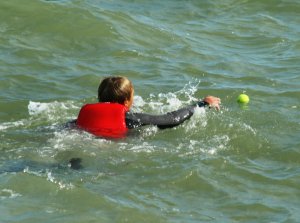 Fabio heads for a tennis ball

We see no ships! 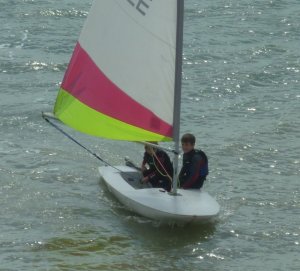 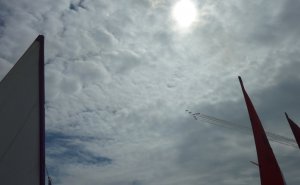 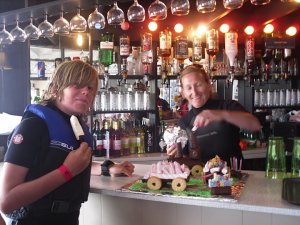 Harry downs a Magnum (ice cream, not bottle of champagne) as mum cuts up his birthday cake 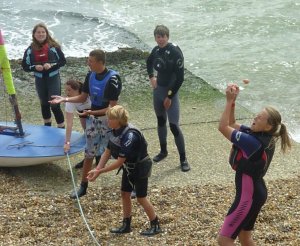 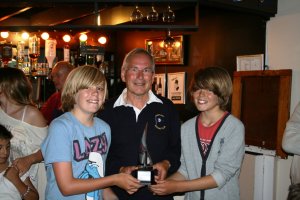 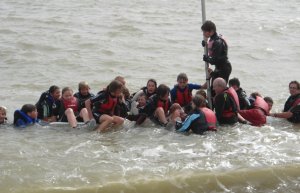 Is this a record? There is a Topaz under there...somewhere! 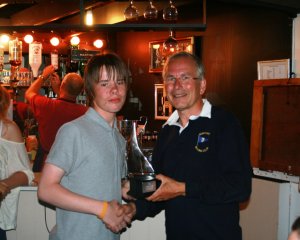