Last weekend it was very much “youth to the fore” when Gunfleet Sailing Club held the 405 Splash on Sunday 23 July with overall victory going to Tom Philpot and Finlay Williams in their boat - Two Salty Nuts.

The weather for the whole day was very mixed and as the competitors rigged their 405s for the opening race the south westerly wind increased to force six.  The first leg was a beat down the coast to the St. Michael’s buoy and leading the way were Beth Elliott and Harry Swinbourne in Little Bee, the boats tacking out to sea to gain the full benefit of the last of the flood tide.  Philpot and Williams decided to just keep going with the aim of doing one single tack and, whilst it didn’t completely pay off, put them in second place as they got to the mark, albeit quite a way behind Balcassor, sailed by Ross and Caleb Aylen.  The brothers played it safe, on the reach out to the Seaward buoy but Philpot and Williams bit the bullet and hoisted their asymmetric spinnaker; at this point the boat took off and started closing the gap.  Meanwhile Little Bee, deciding to follow suit, didn’t have quite the same success and promptly capsized, turning turtle.  Two Salty Nuts was successfully gybed around the Seaward buoy and, kite still flying, went into the lead; maintaining this position right up to the end of the first lap when Balcassor once again slipped past, holding this position until the end.

After lunch, when the wind had abated and the tide turned, the second race was held with all competitors, bar one, closely bunched on the start line; Two Salty Nuts being the windward boat and therefore having the slight advantage.  This time the fleet tacked close to the shore to mitigate the effect of the strong ebbing tide, finding it in their favour as they reached out from St. Michael’s buoy to Seaward, but proving a disadvantage on the beat back to the Eastcliff mark; the wind having veered westerly.  For a second time Balacssor took the lead, despite not using the kite; continuing to hold that position on the run to the AWS buoy and reach to Kingscliff.  On the second lap it looked like nothing was going to stop the Aylen brothers and therefore the winning trophy would be in the bag.  However, a technical disaster occurred when they went took the Eastcliff buoy on the wrong side, immediately being disqualified and giving first place to Little Bee.

This threw the whole thing open and, depending on the positions of the third and final race, could mean any number of possible overall winners.  As the crews nervously nudged their craft up to the start line the wind fell away and a gentle, but possibly frustrating, light air settled in.  Leading on the first leg to the Eastcliff buoy was Derroll Pedder, kindly standing in at the last minute for Alex Corbett who, due to technical reasons, was unable to be there, with Henry Spooner as crew.  Elliott and Swinbourne maintained their tradition of capsizing in every race by going over right on the line, in front of a cheering crowd!  It was Two Salty Nuts that lead the boats around the course and, try as they might, the others were unable to touch the boat, resulting in a win for both Philpot and Williams in both the race and the event overall. 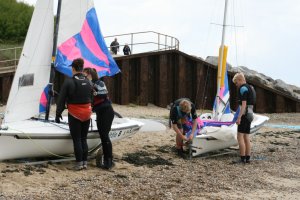 Getting rigged for the racing

The first race, in lively conditions, set for two laps 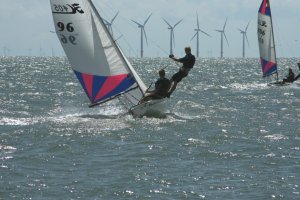 Straight on the wire 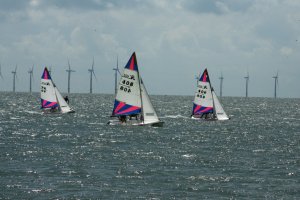 We always knew it would be close 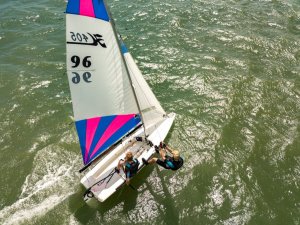 Ross and Caleb from a seagull's perspective 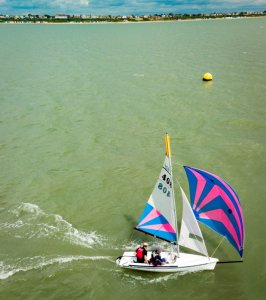 Tom and Finlay pick up speed 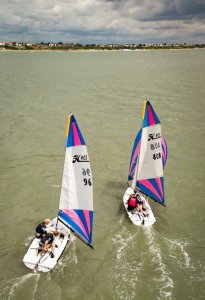 The second race, again for two laps, became quite gruelling as the wind fell away 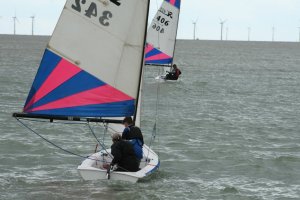 Let's get out and ready for the second race 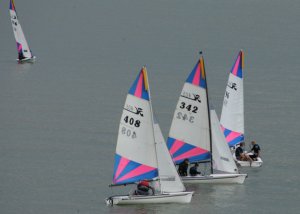 The winds calm down

And to finish, the third race was a small course as the wind had fallen further, and the crews were getting tired

The wind drops right off on the third race 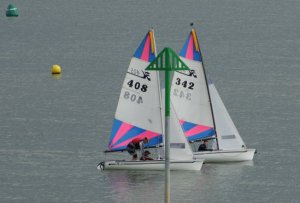 "Two Salty Nuts" is the windward boat, with "Touch 'n' Go" about to be overhauled 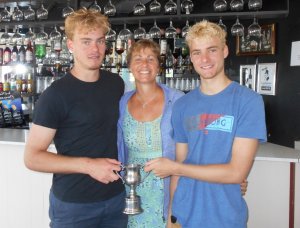 A proud mother presents her sons, Ross and Caleb, with the runners-up trophy - better luck next time boys 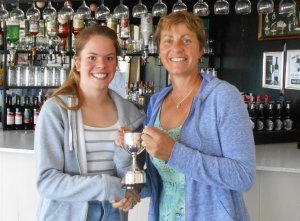