Cadet Week Goes With A Bang

Getting To Know You:  Gunfleet's 2009 Cadet Week got off to a roaring start with 37 young members turning up for the first day.  In a fresh south easterly wind and a lumpy sea everyone got out for a sail, with a large fleet of Topazes and Toppers dominating the waters off the Club.  Both Club Safety Boats were out all the time but apart from a little guidance they were not called upon.  Having all built up a healthy appetite in the morning the crews returned to shore where a lunch was waiting, before a second trip out to get really accustomed to their craft.

Tuesday was to be the Picnic Cruise with Games but the weather decided to put a stop to that.  A force four gusting five southerly wind kept everyone in the vicinity of the Club.

After some exhilarating sailing in the morning, and a picnic in the Clubhouse, it was a chance to have a go at some record breaking.  First off was how many Cadets and Otters can get on a Topaz at once.  Fourteen seemed to be the limit before the boat ceremoniously tipped everyone out.  Then it was who could climb highest up the mast, with every entrant ending up in the water. To round off the day there was a "mini" cruise up to the Pier and back, before the boats were all put away for the night.

Wednesday morning arrived and so did strong winds and gale warnings, so it was shore based activities for everyone.  In the morning it was a mass game of rounders, with Sonny's Team verses Matt's Team, and who won?  Well, it depends who you spoke to.  After lunch in the Clubhouse the group walked to Clacton Lifeboat Station where they were given a guided tour of the whole operation, with a close look at both Lifeboats.  Within 15 minutes of leaving the boathouse and heading back to the Club both the Atlantic 75 and the D-Class were called out to a possible casualty.

Thursday was Air Show Day, and it was also another very windy day! The planned sail up to the Pier, to see the planes in action, was put on hold whilst the more experienced young sailors ventured out to sea for a good thrash. With large waves and a force five wind it proved to be exciting sailing, and the Topazes worked flat out as less confident Cadets and Otters enjoyed being taken out for some great reaching.  Then it was all ashore for lunch, followed by some diving into the rollers as they broke onto the shore, and further sailing as the Red Arrows (and other planes) flew overhead.  The sun shone, the wind blew, the youngsters enjoyed themselves, and another successful day came to an end.

Friday brought (yes, you've guessed it) more strong winds, but it didn't stop the Cadets and Otters having a good time on the water.  Firstly there was the "Surf Dude" Championship, which always looked easy when watching others try and keep their balance.  The one thing you could be guaranteed of, and that was to get wet!!  After lunch it was a chance for some body boarding and wave diving, as the Red Arrows flew over to see all the fun that was being had down at the Gunfleet. 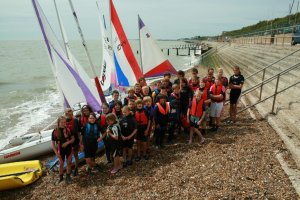 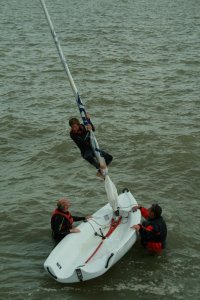 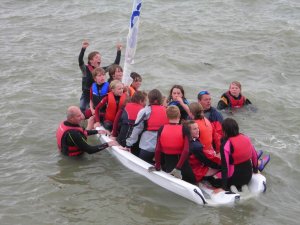 Fourteen on a Topaz and the boat starts to go under!! 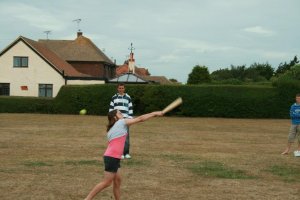 Bethany takes a swing at it! 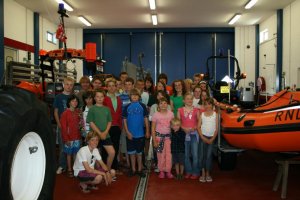 The heart of the Clacton Lifeboat Station - the two Lifeboats 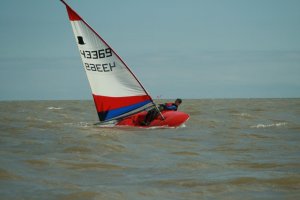 Tom Fadden pushes his Topper to the limit 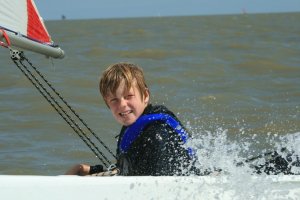 This sailing lark is just brilliant 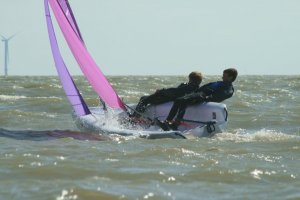 How fast can a Topaz go? 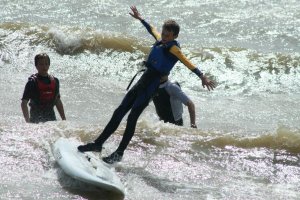 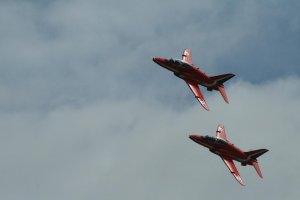