Andy Comes Out On Top

The weather conditions were practically perfect, last Sunday 12 May, for Gunfleet Sailing Club holding the fifth and final race of its Spring Series.  A force three east-north easterly breeze, sunshine, clear skies and blue seas greeted the eager competitors as they jostled for position on the line.  The whole fleet started on starboard tack, with a tight bunch at the Outer Distance Mark; Clare Giles leading the dinghies in her Europe.  Peter Downer was quick to tack out to sea in order to gain the last of the ebb tide as the rest sailed towards the shore; all heading up the coast to the Kingscliff buoy.  The first, and only, capsize of the race went to Eddie White in his Laser.  First to round the mark was Andy Dunnett, in his Laser, followed closely by Michael Gutteridge and Derroll Pedder in the GP14.  However, Dunnett then started to reach out to the Seaward buoy, and it was only after he glanced at his fellow competitors that he realised he was sailing the wrong course; the rest of the fleet heading straight to the AWS buoy on a very broad reach.  Within seconds he was correcting his error but it certainly cost him dearly on time.  Once round AWS it was in to the ODM and at this point Giles found her rudder coming completely off.  She too lost several minutes hanging over the transom to refit this vital piece of the boat; this allowed Dave Fowell to sail cleanly past in his Solo.  A second beat then ensued, back to the Kingscliff buoy before a run to the Eastcliff mark, hooking round AWS on the way.  The final leg was a beat back to the line, Downer continuing to tack off out to sea whilst the rest stayed close to the shore.  At the end of the first lap, Dunnett had re-established his lead, albeit by a small margin, Gutteridge and Pedder lay in second place and, despite her rudder problems, Giles was holding third position.  As the boats set off on the second lap it was clear that the tide has now turned and was flooding.  Once round the Kingscliff the GP14 sets its spinnaker but by now Dunnett has pulled away and was revelling in the conditions.  Giles continues to have problems with her rudder and the race concluded with Dunnett first in his Laser, Gutteridge and Pedder second in the GP14, and Fowell taking his Solo into third place.

Gunfleet Sailing Club opens its doors to anyone who might be interested in the sport of sailing, next Saturday 18 May from 11:00 a.m. to 5:00 p.m.; everyone very welcome. 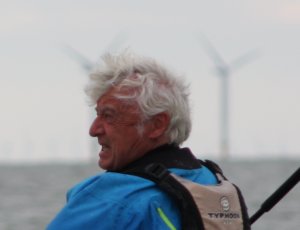 Eventual winner of the race, Andy Dunnett, looks determined to correct his faux pas when he sails the wrong course in his Laser

The course for the fifth race in the Spring Series

At the head of the fleet, a tight bunched group of dinghies get off to a cracking start in the fifth race of the Spring Series